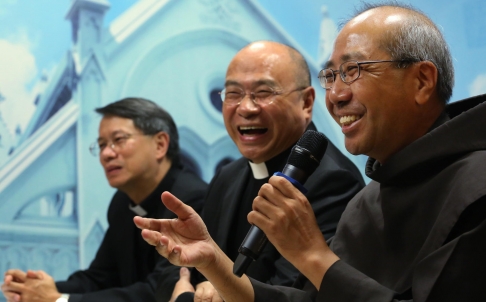 Two auxiliary bishops newly appointed by the Vatican have spoken out about the Occupy Central campaign, saying the church supports civil disobedience when it’s for the common good.

A third new auxiliary bishop meanwhile said the Hong Kong Catholic diocese had come under pressure from the government to consider shutting down its outspoken Justice and Peace Commission because it has been critical of the administration.

Ha also shot down a comment made last Sunday by Anglican Church Archbishop the Most Reverend Dr Paul Kwong that Hongkongers should keep quiet just as “Jesus remained silent” in the face of crucifixion.

“The Bible is very thick,” Ha said, adding that there was nothing wrong with expressing one’s views in a lawful manner. [Source]

Anglican officials defended Kwong’s comments as “humorous and witty” remarks that were “taken out of context.” Critics have maintained that they were inappropriate, and questioned Kwong’s membership of the Chinese People’s Political Consultative Conference, a mainland state advisory body which meets annually alongside the National People’s Congress. Kwong himself spoke up in a newsletter interview this week, SCMP’s Lai Ying-kit reports:

“Jesus remained silent as a lamb. The act in itself is a ‘voice’. His ‘voice’ was not confrontational, but a peaceful, tolerating, accepting ‘voice of love’,” he wrote.

[…] He said he hoped this “approach” could inspire Christians considering how to engage with Hong Kong’s current political debates.

“What I don’t want to see most is a divided Hong Kong. I accept different political views among Christians, and I would not try to change their political stance. But [their] methods have to be legal, and with the love and humility of Christ.”

This had always been his stance regardless of his appointment to the CPPCC, he said. “The CPPCC role only allows me an opportunity to speak from another stage.” [Source]