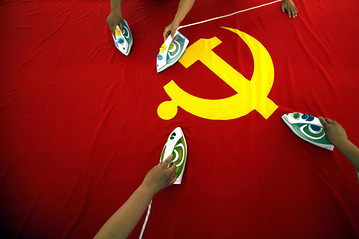 Reuters’ Sui-Lee Wee notes comments from a public web chat by Yao Zengke of the Ministry of Supervision and Central Commission for Discipline Inspection in which he warned that China should learn from the fall of the Soviet Union and keep a tight rein on the views of Party members.

He warned that before the Soviet Union fell apart, the Communist Party there allowed its members “to publicly express views that were different from the organisation”.

“Many members of the Soviet Communist Party, and even its leadership, denied the history of the Soviet Union, rejected the daring vanguard of socialism and became megaphones for broadcasting Western ideology,” Yao said.

[…] “The tumult within the party ideology eventually led to turmoil in the organisation and then finally (we) watched it all come crashing down,” Yao said. “It is thought provoking.” [Source]

The fall of the U.S.S.R. is a favorite cautionary tale among China’s rulers, with Xi Jinping its most prominent enthusiast. In December 2012, partway through his gradual accession, Xi warned:

“Why did the Soviet Union disintegrate? Why did the Soviet Communist Party collapse? An important reason was that their ideals and beliefs had been shaken. In the end, ‘the ruler’s flag over the city tower’ changed overnight. It’s a profound lesson for us! To dismiss the history of the Soviet Union and the Soviet Communist Party, to dismiss Lenin and Stalin, and to dismiss everything else is to engage in historic nihilism, and it confuses our thoughts and undermines the Party’s organizations on all levels.” [Source]

The Party has since announced steps to improve the ideological correctness of its members.

Critics have suggested that the focus on Soviet collapse is misguided or unhelpful. Scholar Yu Jianrong has labeled it a distraction from more pressing homegrown issues such as inequality and rule of law, while former Mexican ambassador to China Jorge Guajardo has argued that Mexico’s Institutional Revolutionary Party offers more valuable lessons, such as how the CCP might survive an end to one-party rule.