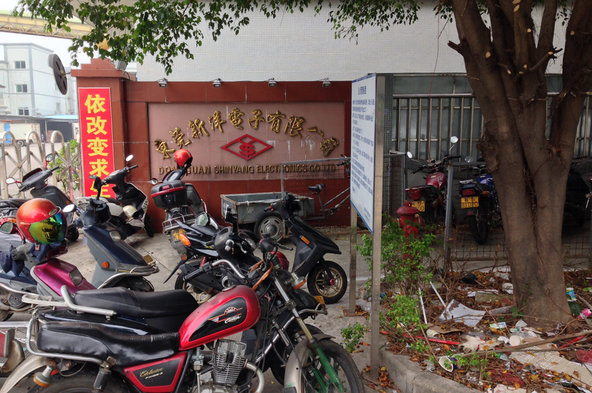 Following a China Labor Watch report released last week alleging the use of child labor at a Dongguan factory that makes phone components for Samsung, the South Korean electronics firm announced on Monday that it has temporarily suspended all contracts with the plant. From the New York Times:

The South Korean electronics giant said its preliminary investigation found “evidence of suspected child labor” at the factory, Dongguan Shinyang Electronics, which is owned and managed by a company in South Korea, and in the city of Dongguan, one of the biggest manufacturing centers in China.

In a news release, Samsung said that the authorities in China were investigating the case, and that if the under-age workers had been hired illegally, the factory could be permanently barred from working with Samsung.

“It is unfortunate that the allegation surfaced despite Samsung’s efforts to prevent child labor at its suppliers,” Samsung said in its statement.

[…] The allegations were embarrassing because on June 30, Samsung released its annual global sustainability report, which noted for the second year in a row that its audits had not turned up any under-age workers in more than 130 supplier factories audited in China. The company also said that it had strict compliance procedures in place, including facial recognition software at its facilities and instructions that Samsung suppliers refrain from hiring workers younger than 18. […] [Source]

Immediately following the China Labor Watch report, the New York Times met with three girls, age 14-15, who were working at the Shinyang factory:

“We also worked at a factory last summer,” said one of the girls, who all spoke on the condition of anonymity for fear of getting fired. “But it was much worse. We were making Christmas ornaments, and some workers got huge blisters on their hands.”

[…] According to the three young girls, they began working at Shinyang on June 30, just five days after the Shinyang factory says it was audited. They said they were hired as “temporary workers,” given fake ID cards and asked to work the most difficult shift, 8:30 p.m. to 5:30 a.m., and then to put in an additional three hours of overtime, six days a week.

The work was grueling but tolerable, they said. The girls complained that they were paid about $1.20 an hour because they had been hired by a middleman or “labor dispatch company.” A typical worker, they said, was paid $1.45 an hour. Labor rights activists say this is an increasingly common way factories reduce costs and skirt the labor law. [Source]

After Samsung suspended contracts with Shinyang, a factory spokesperson told the Times the plant is planning to lay off its 600 workers. A follow-up press release from China Labor Watch further castigates Samsung:

The suspension of business with Shinyang will lead to lay-offs of hundreds of workers who are not to blame for the mistakes made by Shinyang management and labor dispatch companies. If these workers are fired due to the sudden reduction of Samsung’s production orders, Samsung is responsible for the fair and legal compensation of these workers, who will need to support themselves and their families without a job.

Child labor and other worker abuses have occurred in Samsung’s supply chain, yet its solution is to punish even more workers. This reflects Samsung’s lack of respect for workers’ rights.

Samsung plays a key role in causing labor violations in its supply chain. While manufacturers are not innocent of breaking fundamental labor regulations, they are doing so in order to adapt to Samsung’s stringent time and price demands. These factories maintain slim profits by suppressing labor costs. If Samsung, who earned $8.2 billion last quarter, wants to prevent child labor, unpaid and excessive overtime, abuse of student workers, blank labor contracts, a lack of safety training, and other legal violations, then it will adjust its purchasing practices accordingly. Ultimately, Samsung must invest in more legal and ethical labor conditions. [Source]

Similarly, China Labour Bulletin’s Geoffrey Crothall told the Financial Times this week that suspending Shinyang “doesn’t really get to the fundamental issue of underage employment. Corporations can talk all they like about commitment to corporate social responsibility, but if you look at the way they put pressure on their suppliers in terms of price and time, the ones who ultimately suffer are the workers.”

Child labor has previously been uncovered at China based factories holding contacts with multinational firms. In 2012, Apple contractor Foxconn admitted to hiring teenage “interns,” and in 2009 a Guangdong based Nike contractor allegedly employed a large number of underaged workers. See also a current New York Times debate on the tangled issue.