5 Members of “Evil Cult” on Trial for Murder 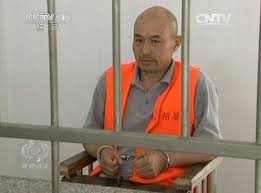 In May, five members of the fringe millenarian Christian group Church of Almighty God, also known as Eastern Lightning (东方闪电), were arrested after fatally attacking a woman who resisted their recruitment efforts in a Shandong McDonald’s franchise. Beijing subsequently launched a crackdown on “evil cults”—a term previously used in reference to Falun Gong practitioners. Xinhua reported earlier this week that the cult crackdown has netted 1,000 members since June:

Chinese police have arrested nearly 1,000 suspected members of the illegal quannengshen (almighty god) cult, according to the Ministry of Public Security.

The suspects, all seized since June, are allegedly involved in more than 500 cases. Among them are nearly a hundred “high-level organizers and backbone members”, a ministry statement said on Tuesday.

[…] “Quannengshen cheats people, illegally collects money and violates the law under the guise of religion. A series of acts by its members have harmed people’s lives and property and disrupted social stability,” the ministry said.

Founded in the 1990s in central China’s Henan Province, quannengshen group claims that Jesus has been resurrected as Yang Xiangbin, wife of the group’s founder Zhao Weishan. The couple fled to the United States in September 2000. [Source]

Xinhua’s announcement of the campaign’s success came just ahead of the five members’ trial for murder, which started yesterday in Shandong and has attracted significant state media attention. The New York Times reports:

Five defendants stood trial in eastern China on Thursday, accused of beating and kicking a woman to death in a McDonald’s restaurant after she resisted their attempt to recruit her into a sect that has been condemned by the government as a malignant cult.

The trial, in the Shandong Province city of Yantai, has been widely publicized by the Chinese news media and has served as the government’s main exhibit in a renewed campaign to eradicate the Church of Almighty God, a homegrown offshoot of Christianity that believes Jesus Christ has returned as a Chinese woman who will save followers from apocalyptic destruction.

[…] The Church of Almighty God fraudulently uses the name of religion to swindle the public and illegally reap wealth,” said a report by Xinhua, the state-run news agency, which accompanied the ministry’s statement. “In recent years, it had been the cause of many cases of harming the public’s safety — of person and property — as well as social stability.”

[…] International human rights groups have said that [previous campaigns, especially those targeting Falun Gong…] have persecuted many people whose only offense has been to embrace beliefs abhorrent to the authorities. Maya Wang, a researcher in Hong Kong with Human Rights Watch, said members of the Church of Almighty God were at similar risk. […] [Source]

After the launch of the crackdown earlier this summer, members of mainstream and state-sanctioned Christian churches—some of which are themselves facing pressure from the state in the form of forced demolitions and crucifix removals—expressed worry that anti-cult rhetoric would tarnish public perception of their groups. In a report for The Telegraph, Malcolm Moore differentiates the group from orthodox churches noting blatant anti-CCP tenets in the sect’s doctrine. From The Telegraph:

Mr Peng [husband of a cult member] said the teachings are straightforward. “They just want you to repeat over and over that you obey ‘God’, listen to her, and not fight back. And there are threats for those who think of quitting. After six months, a new member can be brainwashed.”

[…] In 22 pages of instructions sent from the United States in June and July, the heads of the cult preached that the “chosen ones” should be ready to “sacrifice their lives” and that their ultimate goal is to kill the Communist party, referred to in their teachings as “the Great Red Dragon”.

[…] “My wife was always very respectful of her mother, so when she asked her to start going, she did,” said Mr Qi, whose wife abandoned him and their five-year-old son earlier this year.

“You can see how far from Christianity this cult is. Christianity preaches that family is important. Who would tell a mother to leave behind their child?” […] [Source]

The Church of Almighty God’s extremism and blatant anti-CCP stance no doubt raises hackles in Beijing; central and local governments’ have been known to crackdown even on mainstream religious groups seen as a potential challenge to the Party’s authority, and Party officials are discouraged from any religious observance.