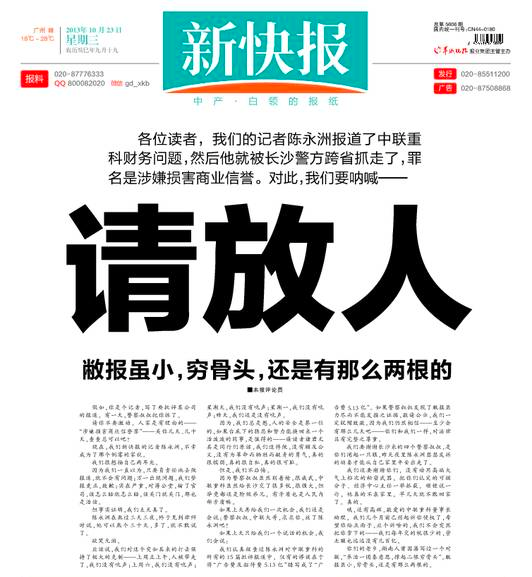 His lawyer Zhou Ze said prosecutors had called him to say that Liu was being released as they were “unable to proceed with the case within the legal detention limits”.

Writing on his Weibo microblog account, Zhou said: “I have always believed that Liu Hu was innocent.”

Liu was first detained last August on suspicion of “fabricating and spreading rumours” after accusing a deputy director of the State Administration for Industry and Commerce, a business regulatory body, of dereliction of duty while serving as Communist Party secretary of a district in southwestern Chongqing. [Source]

“The prosecutor has ordered the police to supplement their investigations several times over the past seven months. It shows the procuratorial organ is in disagreement with the police on the view of the case,” Zhou told the South China Morning Post on Monday.

He said Liu’s detention was a typical example of “criminalisation of speech”, in an effort to halt criticism of those in public office. [Source]

Despite the length of his detention, the collapse of Liu’s prosecution may offer some rare encouragement amid a series of new restrictions on Chinese news media. Read more via CDT.

Updated at 18:53 PDT on August 5th: Liu’s prosecution has not technically collapsed: according to a media directive suppressing coverage of his release, he has “obtained a guarantee pending further investigation.” NYU law professor Jerome Cohen, quoted by Siweiluozi, explained in 2011 that “Qubao houshen (QBHS) is a technique that the public security authorities sometimes use as a face-saving device to end controversial cases that are unwise or unnecessary for them to prosecute.” Investigation may continue for up to a year, however, during which travel and other restrictions may apply.