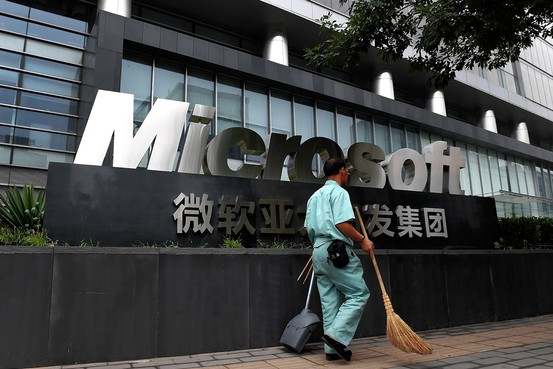 Following the confirmation this week of a Chinese antitrust probe into Microsoft, Xinhua assured readers that the investigation is purely routine, and that “fears that China, once the hottest growth market for Western firms, is turning chillier are totally misplaced.”

Chinese regulator’s anti-monopoly probe of Microsoft is a routine investigation in accordance with the law. Overinterpretation and overreaction is unfounded and unnecessary.

Other anti-trust cases involving big foreign names, such as carmaker Jaguar Land Rover and chipmaker Qualcomm, have led to questions as to whether China is taking on Western companies. There has even been talk of “a changing climate” in the world’s second largest economy.

[…] The probe should not come as a surprise given its history in other countries and regions. It has been embroiled in anti-trust probes in the United States, the European Union (EU), Japan and the Republic of Korea in the past decade. The EU fined it 561 million euros last year.

[…] No company is allowed to break laws with impunity in China, be it Chinese or foreign, state-owned or private. [Source]

China, to be sure, is like any nation that wants to protect consumers from unfair business practices. Its anti-monopoly law has already been used to break up price fixing by domestic Chinese companies in the food, auto and insurance businesses. Regulators have also approved mergers that they didn’t deem anticompetitive. Lawyers say China, to its credit, is moving carefully with the law, often observing precedent set in other nations.

[… But in China] the competitor to U.S. companies is often a government-owned enterprise, and the government makes and enforces the law. U.S. companies have complained that they sometimes first hear about an antitrust action against them in the Chinese media. Evidence and due process can be afterthoughts.

[…] The anti-monopoly law shouldn’t be seen in isolation. It’s one in a long string of measures China has employed to protect and expand its industries. China has used subsidies and government procurement programs to favor or punish companies. It has required foreign firms to develop new technology within China or transfer tech to China as a prerequisite for access to the market. It has used standards-setting for products as a way to exclude worrisome competitors. [Source]

Rows between the U.S. and China over surveillance and cyberattacks have added an additional edge to cases in the tech industry. At China Real Time, Carlos Tejada examines recent difficulties faced by several of the American tech companies dubbed the “eight guardian warriors” by a People’s Daily-owned business magazine:

Last year, a Chinese magazine with ties to the Communist party set its sights on some of the biggest U.S. tech companies doing business in China. “He’s Watching You,” declared the cover of the China Economic Weekly, under the image of a glowering heavy borrowed from a World War II-era U.S. propaganda poster but and emblazoned with the logo of the National Security Agency. Next to the bold-face warning, it identified “eight guardian warriors” – U.S. companies that, the cover said, “have seamlessly infiltrated China.”

The companies – Cisco Systems, International Business Machines [IBM], Google, Qualcomm, Intel, Apple, Oracle and Microsoft – have deeply penetrated the Chinese market and have been used to build a critical information infrastructure in the world’s second-largest economy, the magazine said. By contrast, it said, the U.S. has largely shut out Chinese players like Huawei Technologies and ZTE. [Source]

At the Council on Foreign Relations, Adam Segal writes that China’s wariness of foreign technology firms goes back much further than last year’s Snowden leaks and accusations of hacking by the PLA’s Unit 61398:

For at least the last two decades, Beijing has searched for policy tools to reduce dependence on the United States and other developed economies for critical technologies and to create the conditions for indigenous innovation—for Chinese companies to move up the value chain from labor-intensive to high-technology products. And cybersecurity has also always been a priority and a worry.

In the past, because China still needed them, Beijing and the technology companies came to agreements that everybody could live with. The Chinese government squeezed, but the companies got continued access to the market and made large investments in R&D in China to show the government that they were collaborative partners. China still needs the tech companies, but that dependence, or at least Beijing’s view of that dependence, seems to be lessening. If that is the case, then the anti-monopoly investigations and the broader pressure on American companies are both part of a larger history and the start of something new. [Source]

See more on the investigation and Microsoft’s other recent troubles in China via CDT.