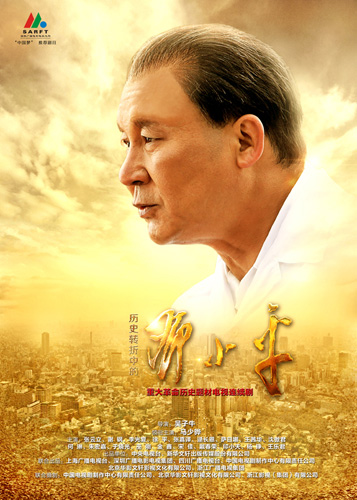 Tomorrow evening, CCTV will air a dramatization of Deng Xiaoping’s political career from 1976 to 1984. Chinese state media are touting Deng Xiaoping at History’s Crossroads (历史转折中的邓小平) as a groundbreaking look at the former president, known for his policy of reform and opening. Xinhua reports on the fanfare the show is receiving:

A 48-episode TV series that tells the story of Deng Xiaoping and the historic transformation of China in the late 1970s made its debut on Thursday in commemoration of the late leader’s 110th birthday.

[..] The premiere was held at the Great Hall of People. Officials from the three units, relatives of Deng, critics, and the crew of the TV series recalled the life of the late, great Chinese leader.

The TV series, which took five years to make, describes Deng’s experiences between October 1976, when the “Gang of Four” was purged until 1984 when the country fully implemented the policy of reform and opening up. [Source]

The famed scholar Ye Kuangzheng told Phoenix that what most impressed him was the appearance of the Xidan Democracy Wall and Hu Yaobang at the very beginning [of the first episode]. The first episode unfolds during the power struggle at the top that began in 1976. “Although it uses a delicate touch, this is the first time these things have appeared in a TV drama, and TV drama is the widest-reaching format at present.” Ye believes this is the “most progressive” aspect of the series.

[…] The series will touch on Deng Xiaoping’s alliance with Ye Jianying to eliminate the Gang of Four, as well as the military support Luo Ruiqing provided.

On Weibo, meanwhile, netizens want to know how Deng Xiaoping could have helped fell the Gang of Four when he only rose to power after they had been purged:

潘文宇又回来了: Right after Mao died, Deng was still fixing tractors in Jiangxi. It was Hua Guofeng and Ye Jianying who got rid of the Gang of Four. Only then did Deng gradually come out of the woodwork. Looking forward to this brain-washing drama!

The cut-off date of 1984 strikes a strange note as well. Deng served as president from 1978 to 1989, and was instrumental in the brutal suppression of protesters in June 1989:

乁囧厂: Everyone wants to see tanks.

江山如墨落画卷: How would you film that thing that happened in 1989?

One netizen questions how brave this TV series can really be:

EnderWang: Huh, does it take guts to sing a praise song?