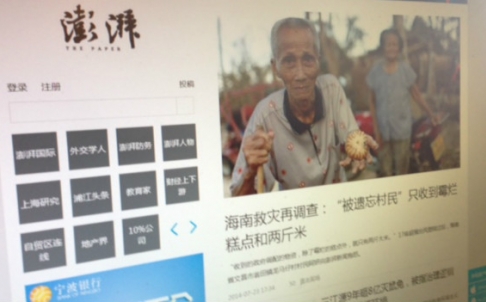 Thepaper.cn, widely perceived as a key player in President Xi Jinping’s vision to establish a “new media” industry, was scolded for “improper practices” by the Cultural Security and Ideology Construction Research Centre – but there were scant details on what those mistakes were.

“The central government officials and relevant departments have conveyed stern criticism of the thepaper.cn for a series of improper practises and requested rectification,” the centre, affiliated to the nation’s main think tank Chinese Academy of Social Sciences, said on its verified Weibo account.

It reminded all news media to stick to the “bottom line” before they innovate their reporting and warned that “no media is exceptional” or exempt from the rules.

[…] The Shanghai United Media Group [thepaper.cn’s state-run operator] is one of the contenders of the ‘new media national team’ that [the] government is keen to endorse,” he said. “So the website’s prospect is unlikely to be affected by what this [warning] has indicated.”

He said it was hard to pinpoint what the website had done to irk the propaganda department. [Source]

Government control of the media—including print, digital, and social media—has been steadily increasing under President Xi Jinping. Earlier this month, Xi called for the establishment of new “strong, influential and credible” media organizations.