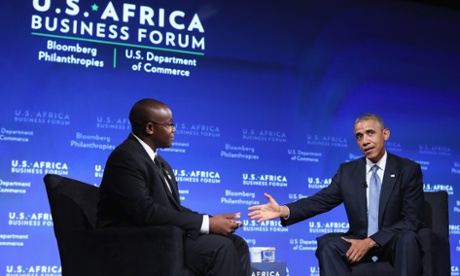 During the first U.S.-Africa Leaders Summit in Washington, Barack Obama took a veiled jab at China, suggesting to the nearly 50 African leaders present that the U.S. has loftier goals for African engagement than does Beijing. From The Guardian:

President Obama took a swipe at China in a speech to a summit of African leaders in Washington on Tuesday, claiming that the US is interested in the continent for more than just its minerals and oil.

“We don’t look to Africa simply for its natural resources. We recognise Africa for its greatest resource which is its people and its talents and its potential,” he told the largest gathering of African leaders ever held in Washington. “We don’t simply want to extract minerals from the ground for our growth. We want to build partnerships that create jobs and opportunity for all our peoples, that unleash the next era of African growth,”

Although the president did not mention China by name, the comments were clearly aimed at Beijing as his administration uses the summit to promote the US as a better partner in its efforts to catch up with the rapidly expanding Sino-Africa trade.

Obama announced $33bn in new commitments to invest in Africa, mostly from private companies such as Coca-Cola and General Electric. But he noted that US trade with all of the continent is still about the same as with Brazil alone. And while the president took a jab at China, two of the US’s three largest trade partners in Africa are Angola and Nigeria because of oil. […] [Source]

China surpassed the U.S. in annual trade with Africa in 2009, and the gap has been steadily widening since. Last year, China conducted over $200 billion in trade with African nations—more than twice that of the U.S. Prior to the launch of the summit yesterday, the South China Morning Post surveyed experts on Washington’s goals:

The summit shows Obama wants to catch up with China on the continent, said He Wenping, the director of the Africa Research Office at the Chinese Academy of Social Sciences’ Institute of West Asian and African Studies. “The US is likely to increase investment in Africa’s energy and infrastructure sector, which will compete with China,” she said.

[…] “The Chinese have set the bar pretty high in engagement in Africa. Given the current tension between the White House and Congress, it’s unlikely Obama can come up with anything close to these numbers in financing for Africa,” [former U.S. ambassador to Tanzania] Stith said.

[…] Anthony Desir, a partner with the Strategic African Mineral Investment Fund, believed the US will make a significant impact on Africa’s economy despite its lower investment levels.

“China has the cash, but lacks deal execution capability,” Desir said. “The Chinese remain at a disadvantage in democratic and transparent economies, even if they spend vast sums. US initiatives only need to grease the wheel so that international capital markets recognise the promise of Africa. That pool of money is much deeper, more savvy and more flexible than China’s bankroll.” […] [Source]