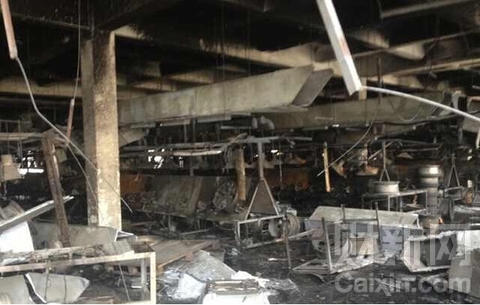 Following the Kunshan Zhongrong Metal Products factory blast that killed at least 75 workers and injured more than 180 last weekend, several news reports have focused on how the abundance of metallic dust in the auto-parts plant could have foreshadowed the deadly explosion. From Caixin:

Workers at an auto-parts maker in the eastern province of Jiangsu which was hit by a deadly explosion two days ago said the factory was filled with pulverized metal every day and they could barely see others from one meter apart.

[…] Experts suggested the explosion was caused by the dust of aluminum alloy, which the factory uses to coat car wheels to make them shiny and resistant to wear. Pulverized aluminum is released when workers use sandpaper to polish the coating. Without proper ventilation, the dust builds up in the air and becomes easily combustible.

[…] Zhongrong was equipped with machines capable of removing 95 percent of metallic dust in the factory, the city’s Environmental Protection Bureau said in a 2007 report.

But workers who escaped the blast said the production lines were always enveloped in metallic dust so thick that visibility was severely impaired.

[…] New workers were recruited and started working the next day without any training in safety protocols and emergency evacuation plans, they said. Smoking is banned near production lines but not in restrooms right outside the workshops. [Source]

More from the South China Morning Post on the factory’s failure to heed warnings by local safety regulators, and on the high wages paid by the plant to laborers aware of workplace risks:

The city’s work safety regulator said it had warned the factory of the potential for an explosion several times, but it was ignored.

The blast is thought to have been triggered by a flame in a dust-filled workshop used to polish car wheel hubs.

[…] Wu Ming, a 45-year-old worker from Sichuan province, has worked in the plant’s sand-blasting workshop for seven years, near to where the blast occurred. He said the car parts factory was well-known among migrant workers for its “dirty environment, but high wages”.

[…] Most of the staff in the polishing workshop were aged between 35 and 45 and were their families’ “bread winners”.

“Workers in that workshop told me they knew it was a dangerous job and it was bad for their health, but they had to earn money for their kids,” he said. [Source]

Bloomberg’s coverage recalls other recent explosions caused by dust combustion at China-based factories, and quotes an expert on the general ease of minimizing risks and lack of regulation enforcement:

Liu Kaiming, the Shenzhen-based director of the Institute of Contemporary Observation, a non-governmental organization that studies labor issues, said combustible dust was “easily rectifiable” with training, ventilation systems and alarms.

There are already an estimated six million workers with pneumoconiosis in China and yet tens of thousands of new cases emerge every year because employers like Zhongrong still refuse to take basic precautions to prevent the build-up of dust or provide regular health checks for employees, as they are required to do by law.

“The management is more mindful of profit than workers’ safety and health,” said Chen Ming, a current employee at the factory. “The company has never organized any health examinations for its employees.”

[…] Construction workers all over China are likewise continually at risk of dust inhalation, especially those engaged in drilling or blasting bedrock while laying foundations [.]

[…] It seems like the system is stacked against workers in high-dust environments: Local government officials don’t enforce the rules, and employers can easily evade their responsibilities or even collude with hospitals to hide test results that would alert workers to the dangers.

It is precisely for this reason, that a group of labour activists is demanding in an open letter that workers be given the right to monitor and enforce workplace safety. […] [Source]

Read more on labor conditions in China, via CDT.