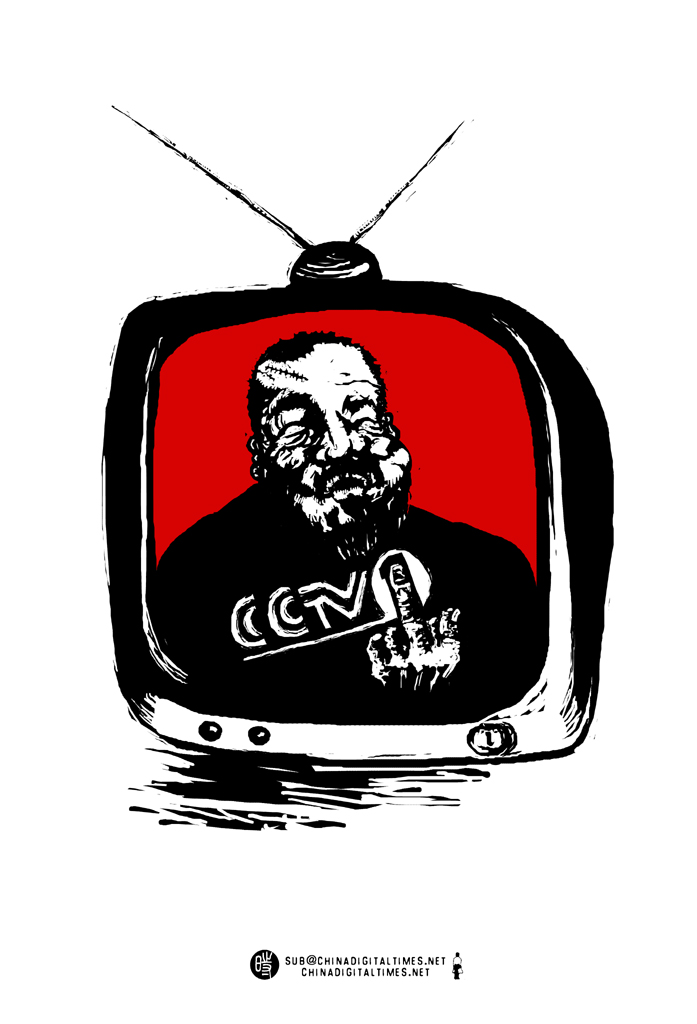 In his most recent cartoon for CDT, Badiucao offers a comment on Ai Weiwei’s surprise appearance on a CCTV-1 late night sketch show last week. While the appearance was brief—Ai uttered no more than three words—Badiucao sees the high-profile dissident’s image making it on to state television as akin to flipping the Party the bird.

The South China Morning Post covers Ai Weiwei’s fleeting appearance and subsequent censorship, and has translated a clip from the broadcast:

Chinese censors have rushed to delete a video from the website of China Central Television after an embarrassing incident in which the state broadcaster accidentally aired a scene featuring prominent dissident artist Ai Weiwei on a late-night comedy show.

[…] Independent filmmaker Zhang Neixian, who recorded the footage, said he had been contacted by an exasperated CCTV producer, demanding to know the circumstances of the video’s production.

The producer told him that police had inquired about the origin of the footage featuring Ai, a “strictly supervised reactionary”.

The filmmaker had little sympathy for the agitated member of the state broadcaster’s staff. “If, from top to bottom, there is no one at CCTV who knows Ai Weiwei, how can they even be making television?” the producer said in a message sent to his friends on WeChat. [Source]

The circumstances allowing Ai Weiwei to make it to the air may suggest the efficacy of China’s censorship regime: no one working on production was familiar enough with the artist to recognize him. Similar media fumbles have occurred in the past. In 2007 in Chengdu, for example, an advertisement paying homage to mothers of June 4 victims made it past editors and to print. The editor, who claimed to have never heard of the June 4th crackdown, was fired.