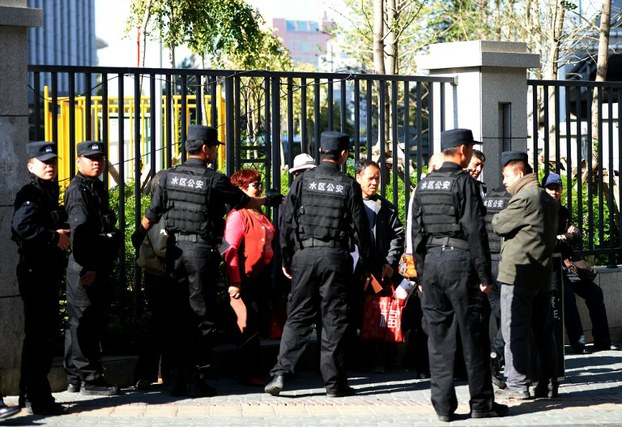 The trial of Uyghur scholar Ilham Tohti on separatism charges has concluded in Urumqi, Xinjiang, though no verdict has yet been announced. Media were not allowed in the court room, but his lawyer, Li Fangping, told reporters that the defendant spoke to the court for 90 minutes and vehemently denied the charges against him. From AFP:

Ilham Tohti, a former University professor and outspoken critic of China’s policies in the vast western region, told the court in Xinjiang’s capital Urumqi he had “always opposed separatism and terrorism, and that not a single one of his articles supported separatism,” according to his lawyer Li Fangping.

The United States,the European Union, and several human rights groups have called for the release of Tohti, who stated his opposition to independence for Xinjiang in interviews, and now faces a maximum sentence of life in prison.

[…] Tohti, 44, said in a closing statement that “he loved his country…and that his opinion has always been that it is in the best interests of Uighurs to remain in China,” Li said, adding that the scholar had spoken loudly with a hint of anger in his voice.

He also told the court that it was “unjust,” for the trial to take place in Xinjiang, as all the evidence presented by the prosecution related to his work in China’s capital Beijing, where he has worked at a University for over a decade. [Source]

“Ilham Tohti is a Beijing intellectual whose household registration is here, whose job is here, and whose website, work unit and students are all based here,” [activist] Hu [Jia] said.

“This is the most important political case in China this year, and it shouldn’t be treated as a local affair,” he said.

[…] Sichuan-based rights activist Pu Fei said the authorities were likely seeking to isolate Tohti by holding the trial in Urumqi.

“I think the real reason is that they want to stop people converging [on Beijing] for the Tohti trial,” Pu said.

“[If that happened], the impact of this case would be much greater.” [Source]

Ilham Tohti’s lawyers were not optimistic about the outcome of the trial as they awaited the verdict. From Jonathan Kaiman at The Guardian:

Although the court has not yet announced a verdict, Tohti’s lawyers said he would likely be found guilty and sentenced to 10 years to life in prison.

“I am innocent,” Tohti said, according to a tweet by Liu Xiaoyuan, one of his two defence attorneys. “I have never organised a separatist criminal group, and I have never engaged in criminal activities intended to split the country.” Tohti has claimed that he spent his career attempting to foster an honest dialogue between Han and Uighurs, rather than advocate Uighur independence.

Police, both uniformed and plain-clothed, sealed off the streets around the courthouse, barring journalists and diplomats from attending the trial, according to accounts posted online.

Prosecutors presented more than 100 articles by Tohti, as well as footage of his classroom lectures, to build an argument that he fomented ethnic hatred in an attempt to split the state, his lawyers said. [Source]

Read more by and about Ilham Tohti, via CDT.