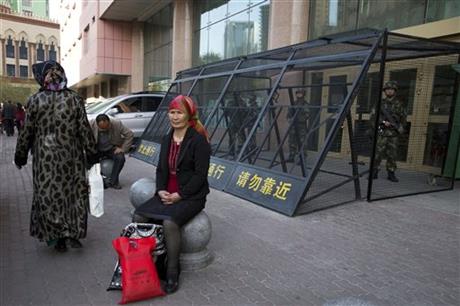 The increase in use of lethal force against suspected terrorists in Xinjiang and other parts of the country by anti-terrorism police units is alarming Uyghur activists and raising concerns about the official use of deadly force. Currently, China does not have comprehensive anti-terrorism laws that set standards for how authorities should respond to suspected terrorist acts. Gillian Wong at AP reports:

When attackers from China’s minority Uighurs killed 37 people in a July rampage in far western Xinjiang, police responded by gunning down at least 59 of them. When three Uighurs allegedly killed a top state-appointed Muslim cleric, police shot dead two of them. When security forces led a raid on 10 suspected Uighur terrorists, they fatally shot all but one.

The incidents are part of a pattern raising concerns that Chinese police are excessively using deadly force in their bid to prevent more attacks by Uighur militants, who have killed dozens of civilians in train stations and other public places over the past few years. In some cities, patrolling SWAT units have already been authorized to shoot dead suspected terrorists without warning.

An Associated Press review of articles by China’s official Xinhua News Agency and other state media has found that at least 323 people have died in Xinjiang-related violence since April last year, when the unrest began to escalate. Nearly half of those deaths were inflicted by police — in most cases, by gunning down alleged perpetrators who are usually reported as having been armed with knives, axes and, occasionally, vaguely-defined explosives.

[…] “Under the terms of the ‘strike hard’ campaign, they can dispense with the usual considerations about legality,” said Willy Lam, an expert on Chinese politics at the Chinese University of Hong Kong. “They don’t have scruples about shooting to kill suspects and they appear to be using disproportionately heavy force and firepower.”

The trend has alarmed overseas Uighur activists, who say many innocent Uighurs may have been killed. [Source]

Recent episodes of violence in China, many of which involving Uyghurs and labeled terrorist attacks by the government, have prompted President Xi Jinping to call for a hard-line approach on terrorism.