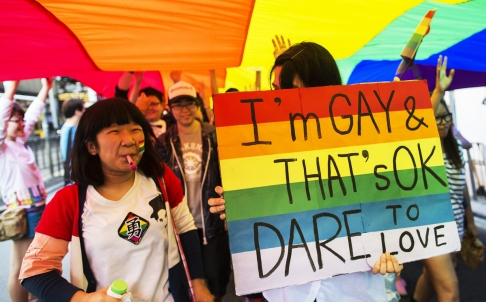 [… A]ctivists from three mainland groups have asked the universities in an open letter to correct teaching materials that might prompt discrimination against LGBTs, and to offer gender diversity courses.

“We appeal and encourage principals at various universities to play a positive role in gender equality education, to face up [to] the basic demands of sexual-minority students including gays, bisexuals and transgenders,” they stated in the letters, which were sent by registered post. [Source]

On Tuesday, the day before Teachers’ Day, the 256 professors and students signed open letters addressed to China’s Ministry of Education as well as to Zhu Chongshi, the president of Xiamen University.

In the letter addressed to Mr. Zhu, the group called on him to make public the findings of an investigation into a sexual harassment case that came to light in June involving a history professor who was accused of luring female students into having sex with him. After the allegations surfaced, the university suspended the professor, Wu Chunming, and announced that it had set up a special team to investigate the case.

[…] “The main thing is that we don’t think this is an individual case,” said Luo Ruixue of the Women Awakening Network, a Guangzhou-based women’s rights group that helped organize the letter to the ministry and Xiamen University. “What we really need is a system in place at universities to deal with these kinds of situations.” [Source]

See also an interview with noted sexologist Li Yinhe, coverage of a gay British diplomat’s marriage to a Chinese man in Beijing, and more on gay rights, sexual harassment via CDT.