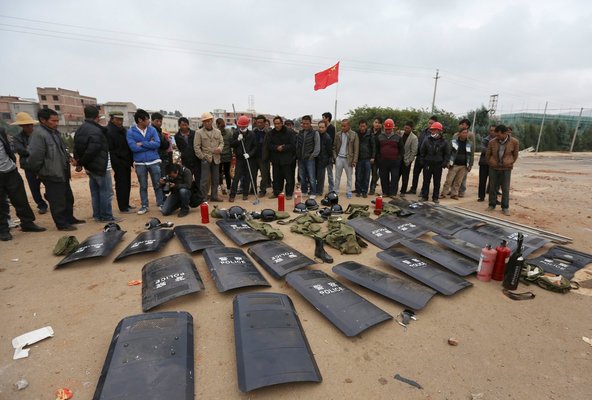 After a deadly clash that arose out of a months running land dispute in Jinning, Yunnan Province earlier this month—in which nine died, several of whom were reportedly construction workers that were tied up, doused with gasoline, and burned by villagers—21 have been arrested by local authorities. The New York Times reports:

Those arrested included six employees of a construction firm and 15 local residents, the Kunming city government said on Tuesday. The announcement added that the death toll had climbed from eight to nine after one severely injured worker died in a local hospital.

A long-running conflict between residents of Jinning County, a semirural area under the administration of Kunming, the capital of the southwestern province of Yunnan, exploded into large-scale violence on Oct. 14. Hundreds of workers dressed in auxiliary police uniforms and carrying shields, tear gas and other anti-riot gear were sent to the village of Fuyou in Jinning County in an effort to intimidate residents and force them to drop their resistance to the construction of a logistics hub for manufactured goods.

[…] The villagers had sought better compensation for giving up their land for the project and had complained about the flooding of vegetable fields as a result of the construction. They had blocked construction work since May, with violence between the two sides flaring over the summer. The Oct. 14 riot exploded as developers pushed to resume work on the project, the Kunming government said. [Source]

While disputes between villagers and/or farmers seeking proper compensation and developers are a major cause of unrest in rural China, the Jinning clash was exceptionally violent and deadly. Last year, Beijing identified rural land use reform as a major policy goal.