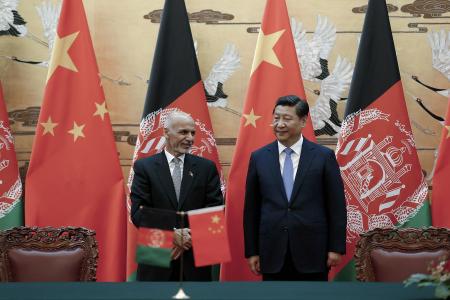 Newly elected Afghan president Ashraf Ghani arrived in Beijing today, where he was welcomed by Xi Jinping as an “old friend of the Chinese people.” The meeting between Xi and Ghani comes as the U.S. and NATO begin to wind down their military presence in the war-torn country; while China has said it will not send troops into Afghanistan, Xi did pledge US$245 million in aid to help in rebuilding efforts. As Afghanistan faces a rebounding threat of Taliban insurgency, Chinese authorities have been keen to present violent unrest in China’s Xinjiang region as part of the global jihad movement. A report from Reuters cites a Chinese official’s claim that Ghani has pledged to aid China in its fight against extremism in Xinjiang, and also offered his support for disputed Chinese territorial claims:

“In the area of security, President Ghani expressed the readiness and staunch support from the Afghan side in China’s fight against East Turkistan Islamic Movement terrorist forces,” Kong Xuanyou, Director General of the Foreign Ministry’s Asian Affairs Department, told journalists after Ghani and Xi met.

[…] Xi has repeatedly urged Central Asian countries to step up the fight against religious militants, which the Chinese government says were behind a spate of attacks in Xinjiang and across China that have left hundreds dead in the past two years.

Experts, however, dispute the influence of foreign militant groups within China, and argue that economic marginalization of Muslim Uighurs, who call Xinjiang home, is one of the main causes of ethnic violence there.

[…] Speaking to Xi at Beijing’s Great Hall of the People, Ghani pressed China to open the Wakhan Pass connecting the two countries, a long-held request from Kabul which hopes to see an influx of Chinese development. China has resisted, fearing unrest will spill over into Xinjiang.

A report from Deutsche Welle notes that Beijing as been slowly increasing engagement with Afghanistan over the past two years, and quotes Afghan officials on the mutual benefits of future economic and security partnerships between the countries:

Beijing has gradually increased its engagement in Afghanistan since 2012. China’s former head of internal security, Zhou Yongkang, traveled to Kabul, with both governments agreeing, among other things, to the training of 300 Afghan police officers in China.

[…] From Kabul’s perspective, the expansion of economic relations with China and cooperation in the fight against terrorism are just two sides of the same coin. “China can play an important role to achieve peace and security in Afghanistan,” Ghani’s spokesman Fayeq Wahedi told DW.

“We see China both as a neighbor and regional power which can support Afghanistan in all areas, including the economy, trade and security.” Terrorism is now a common threat to both the countries, so it is important that the two cooperate to that end,” the spokesman added. [Source]