China Began Push Against HK Elections in the 1950s 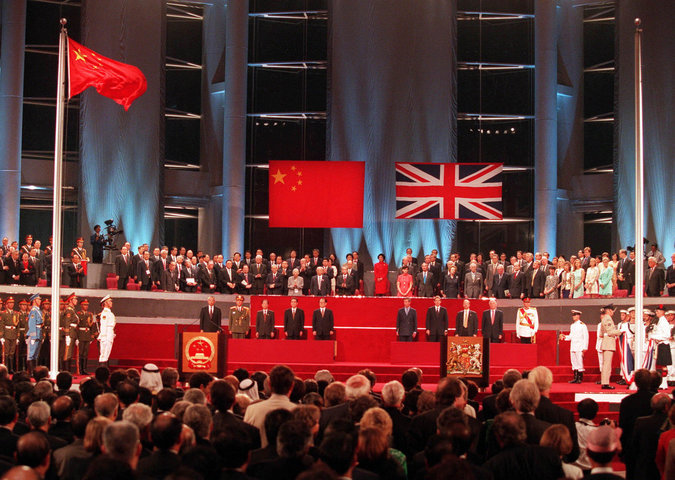 As student and pro-democracy protesters have been calling for Beijing to allow the citizen nomination of candidates in upcoming regional elections, state media has been consistently drawing attention to the fact that under 150 years of British rule, Hong Kong was never allowed free and open elections, even presenting Beijing as the government “pushing for democracy in Hong Kong.”  However, a report from the New York Times’ Andrew Jacobs reports on documents recently released by the National Archives in Britain suggesting that Beijing authorities have been pushing against the introduction of popular elections since the early days of the PRC.

The documents, part of a batch of typewritten diplomatic dispatches requested by reporters from two Hong Kong newspapers, reveal that Chinese leaders were so opposed to the prospect of a democratic Hong Kong that they threatened to invade should London attempt to change the status quo.

“We shall not hesitate to take positive action to have Hong Kong, Kowloon and New Territories liberated,” Liao Chengzhi, a senior Chinese official in charge of Hong Kong affairs, was reported to have said in 1960, referring to the areas under British administration that would later be returned to China.

Another document recounts a meeting two years earlier, during which Premier Zhou Enlai told a British military officer that any attempt to introduce even a modicum of self-governance to Hong Kong would be viewed as “a very unfriendly act” and a “conspiracy,” one he suggested would be seen as a ploy to set the colony on a path to independence.

The threats had the desired effect. Britain made little effort to introduce electoral democracy in Hong Kong in the decades that followed. […] [Source]

At The Wall Street Journal, Louis Gordon Crovitz notes that in 1982 meetings with Margaret Thatcher over the upcoming handover, Deng Xiaoping was adamant about keeping a lid on democratic expectations in the territory:

Margaret Thatcher was taken aback when she encountered fierce opposition from Deng Xiaoping during the handover negotiations. According to the minutes of a key 1982 meeting, made public last year, Thatcher told the Chinese leader that “her duty, which she felt deeply, was to reach a result acceptable to the people of Hong Kong.” She reminded him that even with limited democracy, Hong Kong already had “a political system which was very different from that of China.”

Deng responded by warning Britain not to make any changes that would raise expectations for democracy. He warned that “if there were very large disturbances in the next 15 years, the Chinese government would be forced to reconsider the time and formula” for the handover.

This is the backdrop for the promise Britain managed to extract in the 1984 Joint Declaration, which pledged “one country, two systems,” and in Hong Kong’s post-handover Basic Law ensuring “universal suffrage.” It also helps explain why Beijing denounced the last British governor, Chris Patten, as a “serpent” and a “prostitute for 1,000 years” for his modest democratic reforms. […] [Source]

The covenant, a landmark treaty adopted by the U.N. General Assembly in 1966, was signed by China in 1998 but never ratified, though it applies to Hong Kong. The pact guarantees fundamental freedoms including the right to self-determination and free and regular elections.

Chinese Foreign Ministry spokeswoman Hua Chunying acknowledged that the covenant applied to Hong Kong, but said the treaty had no weight in China, adding that China’s decision on Hong Kong elections had “unshakable legal status and effect.”

“The covenant is not a measure for Hong Kong’s political reform,” she added, without elaborating.

It was not immediately clear how, if the covenant applied to Hong Kong, it could have no bearing on its political reform. [Source]

Netizen Voices: “Hang in There Hong Kong,” Mainlanders Stand With You