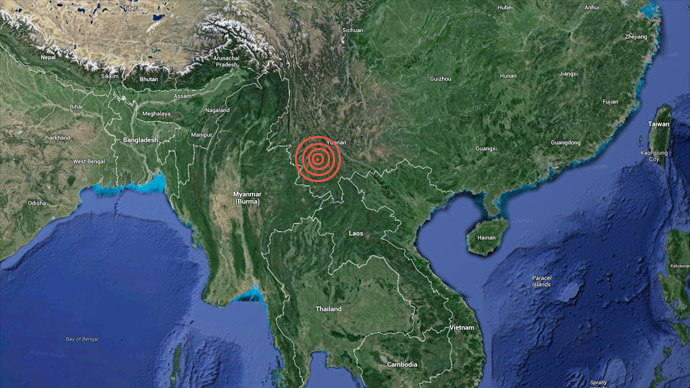 The AP reports that an earthquake in Yunnan Province on Tuesday evening has killed at least one person, injured 28, and forced thousands to evacuate their homes:

The U.S. Geological Survey said the earthquake measured magnitude 6.0 and was centered 18 kilometers (11 miles) from Weiyuan city at a depth of 10.1 kilometers (6.3 miles). Its shallow focus was likely to cause greater damage, but there were no immediate reports of serious destruction.

China’s national earthquake monitoring agency gave the quake’s magnitude as 6.6 and said it struck just 5 kilometers (3.1 miles) below the surface. It said the quake was followed by eight aftershocks, the strongest of which registered at magnitude 4.2.

[…] Worst hit was the town of Yongping, just 5 kilometers (3 miles) from the epicenter, where some houses had collapsed, the official Xinhua News Agency reported.

Bloomberg reports that China is expecting the death and injury tolls to rise as rescue efforts continue:

China said it’s expecting “great casualties and heavy losses” from a strong earthquake that shook Yunnan province in the nation’s southwest, with the initial toll given as 1 dead and 28 injured.

[…] Premier Li Keqiang ordered “whole-hearted” rescue efforts and steps to reduce casualties “by all means,” according to the State Council’s Website.