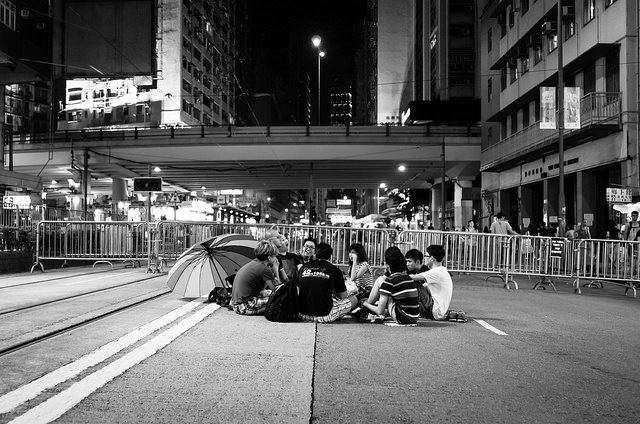 All websites are kindly asked to prominently republish the People’s Daily Online article “Open Letter from Scholar Living in U.S. to Those with Ulterior Motives.” (October 3, 2014)

Raymond W. Yin, a retired physician living in the U.S., has apparently penned this editorial, blasting the organizers of Occupy Central for “encouraging idealistic but naive youth to break the law in order to pursue unrealistic political objectives”:

The three of you who initiated “Occupy Central” are academics and a member of the clergy. Your responsibility is to nurture talent, not to take it onto the streets in defiance of the law at the risk of ruining the future of your charges. Don’t be presumptuous about the absolute integrity of your position. Bear in mind that there is that silent majority who might not share your views. I would council you to read more history and learn from the mistakes of mankind’s past. You may then gain an awareness of the dangers of unpredictability and not seeing the wood for the trees. Most of all, you must avoid violence.

Don’t be besotted by apparent Western superiority and practice. Always think twice before you act.

Tell me, if Beijing were to accept your demands for “one person, one vote” in Hong Kong, and the people on the mainland also were to follow suit in electing the president of the country, where do you think it would lead us in the current situation?

[…] I have studied and worked in the US and Canada for nearly 50 years. I understand that Western democracy is no panacea. For success it requires an upgrade in the quality of the people. According to the prevailing view, democracy is a blessing in Europe and the United States (though not perfect), but a poison in Taiwan, and a disaster in the Arabic world. I predict it would create chaos in China and cause the people to suffer. Do you not understand this obvious truth? [Source]

Contrary to Yin’s claim, the ongoing protests emerged from a student boycott and have no clear leadership.