What Really Scares Beijing About the HK Protests 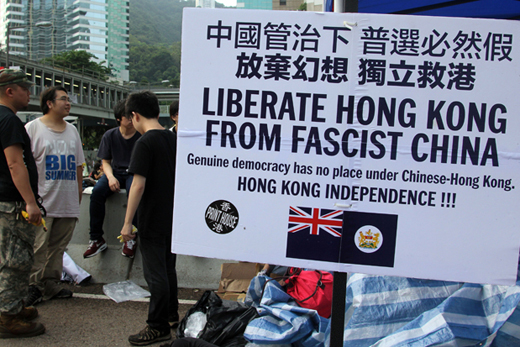 With Occupy Central and student activists entering day seven of pro-democracy demonstrations in Hong Kong, James Palmer explains how the semiautonomous region epitomizes elements of Chinese culture lost in the mainland, and why political activism on the Hong Kong streets might be making central authorities so nervous:

[…T]he truth is that Hong Kong is in many ways more Chinese these days than mainland China. That might be what scares the authorities so much. The shrines and altars that dot Hong Kong speak to the richness of Chinese custom, annihilated between 1949 and 1976 in the mainland. Take Wong Tai Sin, a healing god whose cult once thrived in Guangdong. While his tradition was stamped out there, in Hong Kong his vast temple is a community institution that gives its name to a subway stop. Or take the tiny shrine of the ‘god of the four seas’. When it was founded decades ago, before the city’s land reclamation projects, it was on the coast. But every day, travellers still veer off course to visit it and offer devotions before taking the ferry, because that’s what their grandparents did.

Hong Kong preserves hobby clubs, literary societies, family associations, clan ties and ancestral temples that once made up the fabric of Chinese society. In mainland cities, the once-vast variety of regional cultures and traditions has been wracked twice over; first by Maoist persecution and then by waves of migration and materialism.

[…] The reason the government doesn’t worry too much about [the estimated 90,000 annual yearly “mass incidents” in the mainland]  is because they are very localised. The paramilitary People’s Armed Police may bloodily clash with farmers, but local officials can also be sacked, unpopular policies rescinded, or families paid off — and the state has already won the war. In destroying any wider sense of civil society, they’ve eliminated any means by which these protests might link up into something more threatening. No institution, whether media, environmental groups, unions, or churches, has been allowed to develop into the kind of alternative framework that might bring diverse causes together. Any hint of sympathy protests or wider ideological campaigning is met with a vicious force, legal and otherwise, that has only become worse in the last few years; the very term ‘civil society’, common in 2008-2009, is now virtually taboo in Chinese media.

But Hong Kong still has that civil society, and it’s fighting to stay free. Plenty of mainlanders are emotionally invested in the Hong Kong protests, but they are scattered and un-able to speak out. ‘Hang in there, Hong Kong! Fight for the future!’ one of my mainland friends wrote from the safety of Europe on Facebook, itself blocked in China. […] [Source]

Click through to read James Palmer’s insightful analysis in full. On Friday, protest camps were attacked by pro-government gangs, leading protesters to call off scheduled talks with government representatives. For up-to-date coverage of events in Hong Kong, stay tuned to liveblogs from the South China Morning Post, China Realtime, and The Guardian.