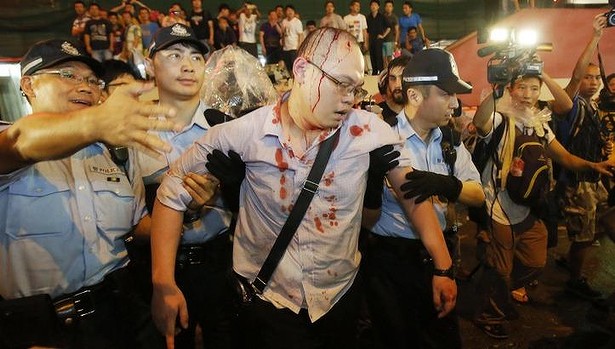 On Friday, violent clashes broke out in two of Hong Kong’s shopping districts after opponents of the week-long democracy protests stormed into demonstrators’ camps, tearing down tents and barricades and attacking those who refused to leave. The New York Times reports:

Pro-democracy demonstrations in two of Hong Kong’s most crowded shopping districts came under attack on Friday from unidentified men who assaulted protesters and tore down their encampments, as the Beijing-backed government sent sharply conflicting messages about how to grapple with the unrest.

The protesters said the attackers were pro-government gangs, and several protest groups called off planned negotiations with the government in response. Whoever the culprits were, and by Saturday morning it was still unclear, they drew crowds of angry supporters, neighbors fed up with the inconvenience of the protests and happy to see gangs step in where the police refused to go.

[…] The skirmishing opened in the Mong Kok neighborhood, a hive of shops, apartment blocks and hotels that is one of the world’s mostly densely populated places, and quickly turned ugly. As skies darkened and rain fell, a couple of dozen men stormed a protest encampment in the middle of a major thoroughfare usually packed with traffic and shoppers. [Source]

The events on Friday fueled mistrust between authorities and protesters, many of whom believe that the incidents were orchestrated violence carried out by paid pro-Beijing thugs from the Mong Kok district’s “triad” criminal gangs. From The Washington Post:

It was unclear whether the simultaneous attacks at two separate camps Friday were a spontaneous expression of residents’ frustration with how the protest has paralyzed large swaths of the city, or whether they were sanctioned by pro-Beijing factions.

But fueling protesters’ suspicions, some attackers were heard speaking with mainland accents, and according to witnesses, at least one was carrying a sign written in simplified characters used on the mainland but not in Hong Kong.

Protesters accused the counter-demonstrators of being thugs sent by Hong Kong’s triads and mainland Chinese authorities, who have opposed the protests and warned that their continuation would send Hong Kong into “chaos.”

“First they told us there would be chaos, and now they have made it happen,” said one demonstrator at one of the attacked sites, who was only willing to give his last name, Fai, for fear of inviting attacks against him. [Source]

The angry and violent backlash against pro-democracy demonstrators raises the question of whether, and for how long, the protests can last. From CNN:

Fewer people were camped out and sitting on the roads than earlier this week. More people were milling about and wandering the streets.

The protests have snarled traffic in Hong Kong’s main finance and commerce districts. It remains unclear how long the protests can maintain support and continue to draw the numbers that have so farclogged main arteries.

“If (the students) drag this on for a really long time, they’re going to start losing some of their support,” said David Zweig, a professor at the Hong Kong University of Science and Technology, as he stood at the main protest site.

At the same time, there is “enormous pressure” for the students to gain something from the mass demonstrations. [Source]

#HongKong gov, CE and CS all made statements tonight, all failed to call for assailants to stop violence but instead ask protesters to leave

No reports of anti-protest #HongKong protestors for days and suddenly they magically appear in 2 locations simultaneously to beat people up?

And intimidation of journalists! Welcome to the new #HongKong. As if one country, two systems needed to be any deader tonight.

The #HongKong I was born in and have known is never coming back, regardless of what progress #OccupyHongKong makes.