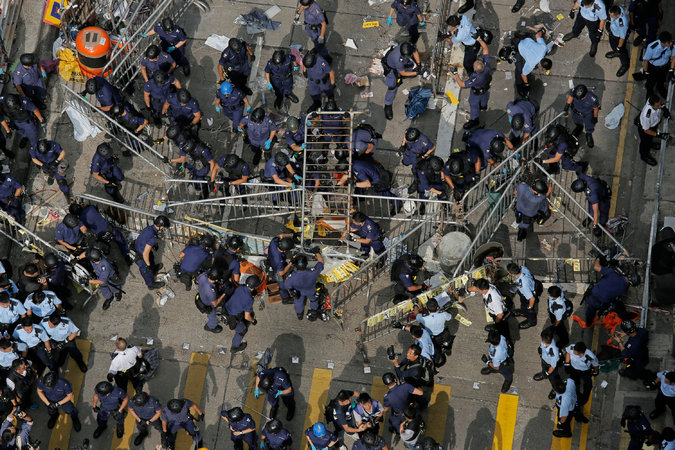 The officers, who were not identified, were arrested on charges of “assault occasioning actual bodily harm,” a police statement said. In the predawn hours of Oct. 15, Ken Tsang, a social worker, was kicked and beaten by a number of police officers in an episode that was filmed by a television crew and heightened animosity between theHong Kong police and protesters after it was shared on social media.

The Hong Kong government and the police have come under criticism for moving slowly to prosecute the officers. The police statement issued Wednesday said there had been no delay. “Police reiterate that if any Force member commits illegal acts, Police will handle this seriously and investigation will be conducted in a fair and impartial manner,” the statement said. [Source]

The event followed a clearance of one of the largest protest sites in the city that resulted in the arrest of 116 people including student leaders Lester Shum and Joshua Wong. Wong was released on bail on Thursday, South China Morning Post’s Chris Lau and Lai Ying-kit report, and complained about the violence of his arrest:

Student leader Joshua Wong Chi-Fung has been banned from entering parts of Mong Kok as a condition of his bail after he was charged with obstructing a bailiff who was clearing barricades erected by pro-democracy protesters.

[…] Outside Kowloon City Court on Thursday afternoon, Wong said he was disappointed by the behaviour of police, who he accused of “attempting to injure him in the groin” while he was being dragged away on Tuesday.

“A team of 12 helmeted police officers rushed towards me and pushed me to the ground,” he said. “I was injured in the neck.”

Wong also said he was taunted and swore at by officers while in custody and was told at 3am on Thursday that he would go to court seven hours later. [Source]

Video footage of Wong’s arrest has been posted on Facebook: