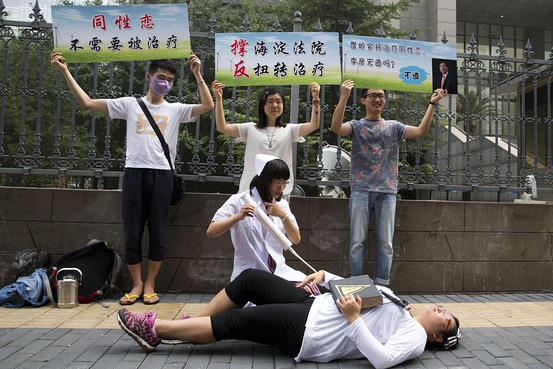 Gay rights activists in China are becoming increasingly worried after a lawsuit filed against gay “conversion” clinic in Beijing has passed the deadline for a decision without further ruling from the court. Josh Chin at China Realtime reports:

The lawsuit, filed with Beijing’s Haidian District Court in May, accuses a psychiatric counseling clinic in the southwestern city of Chongqing of exceeding the bounds of its license in offering to “cure” homosexuality. Search engine Baidu, which published ads promoting the clinic, is also named in the suit as a co-defendant.

The willingness of the court to hear the case took many by surprise in a country where authorities and families alike have tended to take a “don’t ask, don’t tell” approach to issues around homosexuality. But last week, the court exceeded the six-month window allotted for issuing judgments in civil cases in China, sparking concern that clinics might continue to promote gay conversion services without challenge.

“The delay in the ruling has a major impact on the gay community,” said the plaintiff in the lawsuit, a 30-year-old Beijing resident who goes by the pseudonym Xiao Zhen. “The clinic in the suit is still offering to cure gay people, and it’s not just them. There are lots of clinics and mental hospitals offering this kind of therapy all across the country.”

Wang Chenghong, the judge in charge of the lawsuit, said by phone that a decision would be released soon, but did not provide specifics. “When it comes out, you’ll know,” she said. Asked why the court had missed the deadline, she said the case hadn’t been delayed, then hung up. [Source]

Read more about sexuality change therapy and gay rights in China, via CDT.