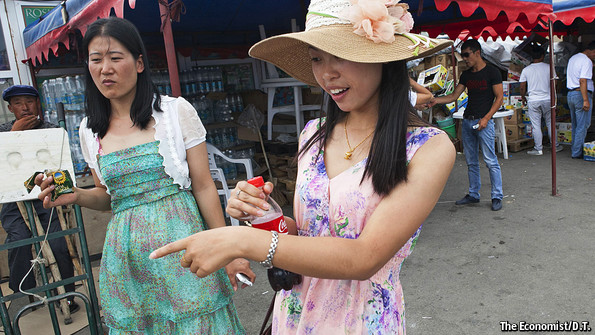 This week’s Economist examines Kazakhstan’s part in building a new trans-Eurasian “Silk Rail.” Chinese president Xi Jinping has championed the expansion of roads, rails, and pipelines across central Asia in order to develop China’s west, boost its regional influence, and ease its dependence on potentially vulnerable shipping lanes. But overland routes bring their own risks and entanglements:

Most containers still travel by sea, which is considerably cheaper—about $4,000 each rather than $9,000. But the gap is narrowing as European manufacturers start filling the empty carriages going back to China with high-priced products such as luxury cars. Ronald Kleijwegt, who runs logistics in Asia for Hewlett-Packard, a big maker of information-technology hardware, says this year is the first when freight volumes going east have shown strong growth. The railway fits neatly into the vision of Xi Jinping, China’s president, who has championed the New Silk Road as an alternative to American-controlled sea-lanes. On November 8th Mr Xi pledged $40 billion to “break the connectivity bottleneck” in Asia.

Success, however, depends also on Russia, China’s rival for influence in Central Asia. It was a Russian-led project that helped streamline transport across Eurasia in the first place. In 2011 Kazakhstan, along with Russia and Belarus, formed a customs union, which is scheduled to become the Eurasian Union in January. Kazakh critics say the union is Vladimir Putin’s attempt to rebuild the Soviet empire. Worryingly, Russia’s erratic behaviour in Ukraine has coincided with a drop by a fifth in customs-union trade this year. […]

[… T]he common market has slashed the number has slashed the number of bribe-hungry customs agents between China and Europe (at the Kazakh-Russian and Russian-Belarusian borders). Mr Kleijwegt hails the customs union for dismantling these “bottlenecks” and knocking four to six days off the journey. On the other hand, he cautions that tensions between Russia and the West make the route vulnerable. Europeans are likely to find relying on Russia for their goods makes them uncomfortable. [Source]

Political stability is an even greater issue for similar projects in Afghanistan. Beijing, therefore, is aiming for diversity. On Monday, Reuters’ Brenda Goh reported on the announcement of China’s new $40 billion investment in parallel land and sea routes.

“It is China’s wish to have an independent route,” said Henrik Christensen, president of global logistics at KTZ Express, part of Kazakhstan Railways, which helped develop the Chongqing-Duisburg route.

“The cost of it is so mind-blowingly big and I would say that the only country in the world that could ever dream of this is China,” he said. [Source]

[…] With the TPP, the United States emphasizes high standards in market liberalization and openness. China’s Silk Road strategy has no “standards,” except for a vague idea of mutual interest and mutual respect. The TPP seeks to reduce the roles of governments in market operations and to restrict the importance of state-owned enterprises (SOEs) in the economies of its members. The Silk Road plan, in contrast, relies on top-level government coordination, and would enhance the power of large SOEs and governments. The TPP focuses on services, intellectual property rights, and domestic regulations. The Silk Road strategy aims to facilitate large-scale infrastructure construction, energy sale and transport, and relocation of manufacturing industries.

It’s not only that the Silk Road plan is a better fit for China. Leading Chinese political thinkers also see the TPP as an enterprise with the potential to weaken China economically and politically – a strategy “to contain China” and to “change or overturn existing institutions in Asia-Pacific and the world,” observed Chinese economics scholar Gu Guoda at Zhejiang University in a recent article in the party journal Probe. […] [Source]

Read more on HP’s Silk Road ventures in a 2013 feature by The New York Times’ Keith Bradsher, via CDT. China is also involved in the opening but limited niche of Arctic cargo shipping, and has been a persistent presence in rumors of future rivals to the Panama Canal, including a “dry canal” across Colombia and a wet one across Nicaragua.