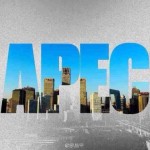 The color of the skies over Beijing during the Asia Pacific Economic Cooperation (APEC) summit in November 2014. In an effort to cut air pollution by 40%, the city has given students and workers a bonus “Golden Week” holiday, halted factory and construction work, enacted alternate driving days for even and odd license plates, and even put a temporary stop to barbeques and cremations. Smog has indeed cleared up, but by how much remains murky: air quality data from the US embassy, followed by residents on the China Air Quality Index app, has been censored.

“APEC blue,” then, describes a hue reserved for foreign dignitaries, and a measure of air quality that excludes some of the truth.

翁涛02: A few days ago during the imperial capital marathon, the entire city was covered in a poisonous haze. But right now, they’ve manufactured APEC blue. (November 7, 2014)

财经女记者部落: #APECblue tells us: It’s not that the government can’t do it, it’s that you aren’t important! (November 6, 2014)

Tags :air pollution,apec,Beijing,pollution,word of the week