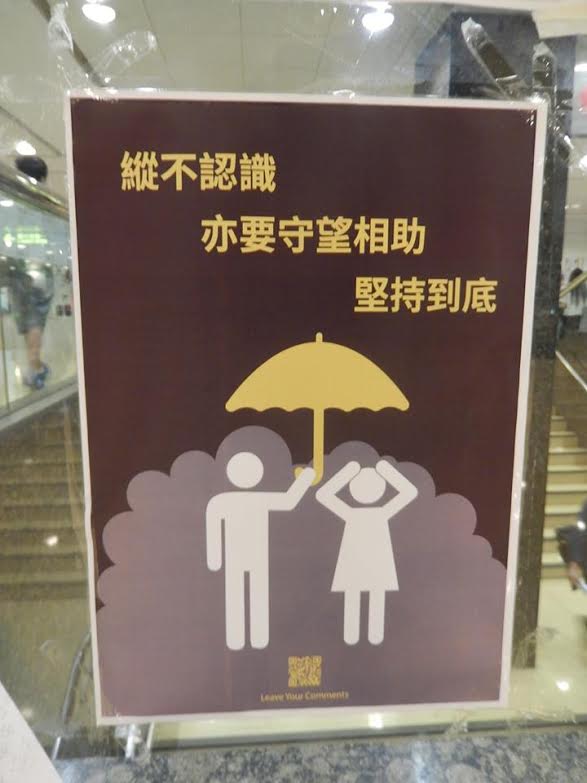 Student leaders of the ongoing protests in Hong Kong were denied permission to travel to Beijing to press their demands with the central leadership. AP reports:

Alex Chow, Nathan Law and Eason Chung — members of a student group that played a main role in organizing massive street protests that started nearly two months ago — arrived at the Hong Kong airport greeted by dozens of well-wishers holding up yellow umbrellas. But they were denied boarding passes for a Cathay Pacific flight when they were told their documents that would allow them to travel to Beijing were invalid.

“The Cathay Pacific has confirmed … that the (students) got their return-home cards cancelled by the mainland authority, so they cannot get the required certificates to get onto the plane,” said Yvonne Leung, general secretary of Hong Kong Federation of Students.

In a news conference hours later, the student leaders said annulling their travel documents is an unreasonable move that deprives them of their rights to enter the country’s territory. [Source]

Hong Kong police have vowed to follow through on plans to clear protesters off the streets this week, following more than six weeks of protests calling for full suffrage in the election of chief executive among other demands. At the same time, a new poll shows that public support for the ongoing protests is waning and for the first time a majority of respondents think it’s time for the demonstrations to end. From Samuel Chan, Phila Siu, Shirley Zhao and Emily Tsang at the South China Morning Post:

For the first time since it started the poll in September, Chinese University found more people opposed the Occupy movement than supported it. Of the 1,030 respondents, 43 per cent were against and 34 per cent for the movement – indicating a shift in public sentiment.

Even those who supported the democracy protests believed it was time to bring it to an end. About 67 per cent of all respondents said protesters should go home.

This came as a police source told the South China Morning Post that the force would take action “within this week” to help bailiffs implement court injunction orders against protesters occupying sites in Admiralty and Mong Kok.

But he said police would not carry out the action at “odd hours”.

The protest movement has spawned a variety of artworks and images, which some people are now working to save and protect as a historical record. Joyce Lau of the New York Times reports:

Because most of the art is still on the streets, the archiving is largely digital. Some digital renditions and objects are already running alongside the “Disobedient Objects” exhibition at the Victoria and Albert Museum in London.

The Umbrella Movement Visual Archives and Research Collective, led partly by academics, is creating open-data platforms and Google maps to mark the locations of art pieces.

A new group — Umbrella Movement Art Preservation, or UMAP — has “rescue team members” on the ground, armed with cellphones and ready to mobilize volunteers to evacuate art on short notice. They have received offers of help from sympathetic truck drivers and about a dozen private galleries.

“Our work is important because these artifacts and images document the spirit of the time, of the year 2014, and our calls for political reform, democracy and justice,” said Kacey Wong, an artist, educator and participant in UMAP. “It is a reflection of our civilization. It’s how we will be remembered 25 years from now.” [Source]

Read more about the protest movement in Hong Kong, via CDT.