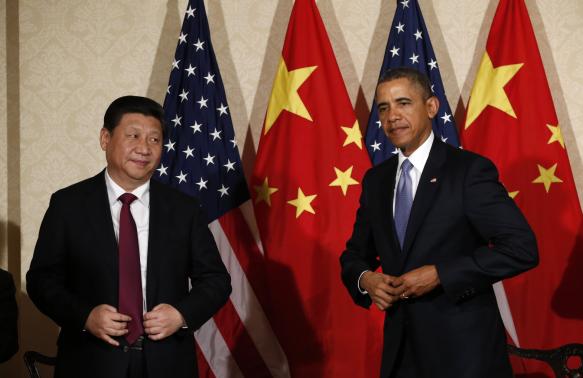 On Saturday, November 29, President Xi Jinping followed up on China’s hosting of the APEC meetings and other recent high-profile diplomatic initiatives – including proposing a “New Silk Road” tying China’s economy to Central Asia, and an Asian Infrastructure Investment Bank – by outlining his goals and priorities for foreign policy in a speech that was televised on CCTV. Xi presented, “a more enabling international environment for China’s peaceful development,” according to Xinhua, which many analysts interpreted as Xi moving away from Deng Xiaoping’s passive approach to foreign policy into a more assertive and confident role. Matthew Miller of Reuters reports:

China should “promote peaceful resolution of differences and disputes between countries through dialogue and consultation, and oppose the willful use of threat of force,” Xi said in a major policy address this weekend, according to a report by the official Xinhua News Agency late on Saturday.

“We have advocated the building of a new type of international relations underpinned by win-win cooperation,” Xi told a meeting of top leaders convened by the Communist Party to discuss foreign policy. China championed “a new vision featuring common, comprehensive, cooperative and sustainable security.”

For the Sydney Morning Herald, Ting Shi and David Tweed further expand on Xi’s turn away from the long-held policy established by Deng Xioping that China should take a passive role in foreign affairs:

The speech by Mr Xi reflects how China is shifting from its long-held dictum “hide your brightness, bide your time”, as set by late leader Deng Xiaoping more than 20 years ago. Since coming to power Mr Xi has travelled extensively in Asia, Europe and Africa and recently hosted the Asia-Pacific Economic Co-operation forum, touting China’s role as a major security and economic power after years of US dominance in the region.

“It’s clear that the current leader doesn’t want to practise this dictum any more,” said Niu Jun, a professor of international relations at Peking University in Beijing who has researched the Communist Party’s foreign relations for 30 years. “This is a very significant indicator of a transforming foreign policy.”

Under Mr Xi, China is modernising its military, asserting its territorial claims in the East China Sea and South China Sea, and boosting investment and trade with its neighbours. Mr Xi has also pushed a plan to revive the ancient Silk Road trading route to Europe, part of his “Chinese dream” to rejuvenate the Middle Kingdom and expand its sphere of influence beyond economics to politics and culture.

“This speech confirms that China has moved to a different kind of posture – one where China proactively tries to shape its own environment,” said Zhang Baohui, director of the centre for Asian Pacific studies at Lingnan University in Hong Kong. “China is no longer the passive actor that Deng prescribed.” [Source]

In the Diplomat, Chen Dingding argues that Xi’s speech signals the formation of a long-term strategy to develop a more confident and assertive China that will not “bow down” to foreign pressures. This approach was made evident most recently when the Chinese government rejected visas for a group of British MPs planning to travel to Hong Kong to investigate bilateral relations 17 years after control of the territory reverted back to the mainland:

One new and important message from the speech is that now there is a clear strategic goal for China’s foreign policy. Unlike the U.S., China does not have the tradition of making its strategic goals known to the outside world. It used to be case that China’s foreign policy was primarily meant to serve China’s economic development, which was the most important goal above all else. Now things have changed. The new goals are the “two centenary goals” which are more specific and ambitious than just economic development. The contrast is particularly salient if one compares Xi’s speech this time with the 2006 speech on foreign affairs by Hu Jintao in which no strategic goal was mentioned.

Another interesting message is that Chinese leaders view their foreign policy after 2012 as a major success thus refuting the view that Xi now takes a more careful approach or a conciliatory tone. If the dominant interpretation by Western analysts were that China will back down from some of the disputes with other countries in Asia, then this would be a serious mistake on the part of those analysts. Of course, China being firm does not mean that it will act recklessly and increase international tensions on purpose; it simply means that Xi and his colleagues will not bow down to foreign pressures in defending China’s national interests. It also means that China’s so-called assertive foreign policy behavior will continue rather than stop, as some Western analysts have hoped.

For the Lowy Interpreter, Rory Medcalf agrees that the speech indicates a positive move away from confrontation and toward soft power goals:

The good news is that Xi’s speech is much more about diplomacy than raw power. It follows a season of statesmanship in hosting APEC and President Obama, advancing Chinese interests in a non-confrontational manner at the East Asia Summit and the G20, and successful visits to reassure Australia and New Zealand about China’s intentions.

One way to read this speech is that it knits together China’s ambitious diplomatic initiatives to change the Asian and global order, from a new infrastructure bank to new security conferences. Therefore it affirms China’s intent to challenge that order, albeit carefully.

It underscores China’s determination to defend and advance its maritime claims and interests, develop a ‘maritime silk road’ of economic, diplomatic and security links across China’s version of the Indo-Pacific, and develop the capabilities to protect its growing overseas presence.

But the speech is also important for its notes of prudence and restraint, with an emphasis on better communicating China’s ‘soft power’ message. It places weight on building regional institutions and a global network of partners. It contains reminders about the non-use of force and even respect for international law.

In his speech, Xi described his soft power goals and how they play into his somewhat nebulous idea of the “Chinese dream”, according to a report by Jane Perlez of the New York Times:

Referring to the Chinese dream, a phrase that he uses repeatedly before domestic audiences to emphasize how China will soon realize its full economic, military and social potential, Mr. Xi said it was now time to take that dream to the world. China, he said, must “highlight the global significance of the Chinese dream.”

It was vital, he said, to “increase China’s soft power, give a good Chinese narrative and better communicate China’s message to the world.”

Asia, rather than the United States, seemed to be the focus: China, he said, was pursuing a “neighborhood policy featuring amity, sincerity, mutual benefit and inclusiveness.” [Source]

But in the South China Morning Post, Syed Munir Khasru argues that recent events show that Xi Jinping is indeed demonstrating a more cooperative approach in diplomacy, but notes:

However, the rise of China has not been uniform. There is a debate over whether its successful economic diplomacy can be translated into normative leadership. The more China helps developing economies overcome their structural weaknesses and development constraints, the more its credentials as a leader will go up, but that is not the whole story.

Language and cultural issues act as a barrier to the projection of Chinese soft power. Stronger involvement in social and human development, knowledge sharing, and coming to the aid of countries devastated by natural or man-made disasters, are important parts of soft power which are not currently China’s forte.

In addition, US defence spending is still more than three times that of China. It is not very clear, aside from Russia, who else in Asia is going to be China’s strategic ally in practical terms. Countries like Sri Lanka or Bangladesh are possible choices.

Obama has reiterated that China is bound to rise in prominence and Washington is willing to work constructively with Beijing. Positive engagement between the world’s top two economies requires mutual accommodation between the status quo hegemon and the aspiring leader. The game is far from a zero-sum one. [Source]

See also: “Is China Forging a New Global Order or Committing to the Old?” from CDT.