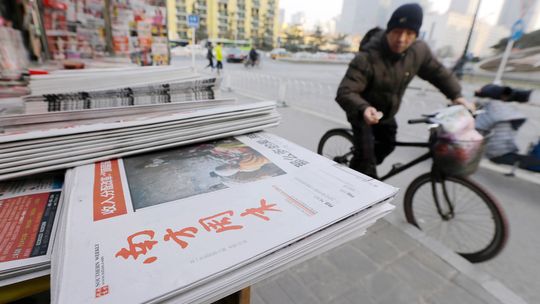 Guangzhou-based Southern Weekly was once considered one of the most influential media outlets in China—and certainly the most outspoken of mainland circulating newspapers. After several of the paper’s editors voiced anger over censored articles in 2012, the annual New Year’s editorial, which for years had laid out a call for constitutionalism, was replaced with one praising the CCP. The Paper’s editorial staff went on strike, and a rare public protest for press freedom then ensued in Guangzhou. At Tea Leaf Nation, Chinese media politics scholar Maria Repnikova and former Southern Weekly journalist Kecheng Fang look at how the once influential paper has since been driven to the margins of Chinese media:

[…O]ver the past two years, the Weekly has continued to lose its erstwhile status. Journalists’ hopes that a collaborative attitude towards authorities could buy more room for solid reporting in the wake of protests have not seemed to pay off. Tuo has remained in charge, and according to over ten staff reporters who currently work at the Weekly, tight censorship has persisted. As a result, the Weekly appears to be losing its luster in the eyes of Chinese literati. A number of media scholars, journalists, and Chinese officials alike observed that they now take the publication less seriously. “I no longer read the Weekly,” said a former high-ranking official speaking on background in March 2014. In January 2015, an expert in Chinese media who did not wish to be named said she had not read theWeekly directly in years, only looking at Weekly articles when friends posted them on social media.

Economic pressures have accompanied the political pressures facing theWeekly, at which one of this article’s authors worked from July 2010 to July 2013 before quitting to pursue graduate study in the United States. Since October 2014, the price of the paper has almost doubled from about $.50 to about $.80, while the number of articles has shrunk, suggesting difficulty in garnering readership and advertising revenue. In a November 2014 article for Southern Media Studies, a media-studies journal, Wang Wei, the current editor-in-chief of the Weekly, wrote that both revenue and profit declined in 2013 compared to 2012 (full-year 2014 statistics are not yet available.) As its reputation for a source of popular exposés began to fade, so, apparently, has its appeal to advertisers.

The Weekly once stood among the pioneers of serious investigative journalism in China. Since the 1990s, the Weekly had shown how engaging with social issues ignored by most other media – while staying away from authorities’ red lines – could make a publication commercially successful while allowing it to withstand the vicissitudes of Chinese politics. […] [Source]

Chinese journalist Yang Zili first appeared in international headlines in 2001 after being arrested in Beijing and charged with “subverting state authority.” His crime was starting the “New Youth Society,” a salon with the stated mission of “seeking a road for social reform.” Mr. Yang eventually served eight years in prison for his involvement.

Once released from prison, Mr. Yang joined the Transition Institute. Unlike many other nongovernmental organizations in China, the Transition Institute isn’t engaged in direct social action but rather focuses on research work as a think tank. While there, Mr. Yang studied Chinese social issues and proved to be a prolific writer. Much of his work was on equal access to education and migrant-worker rights. His friends applauded his return to the public sphere within a profession that still allowed him to promote social change.

We had no idea how quickly the tide would turn. Mr. Yang is now in hiding. Chinese authorities last year detained three leaders of the Transition Institute and six people indirectly involved, including the lawyer Xia Lin. The organization remains paralyzed. It suffered this fate despite having a far more nuanced understanding of political struggle than did the New Youth Society in 2001. […] [Source]