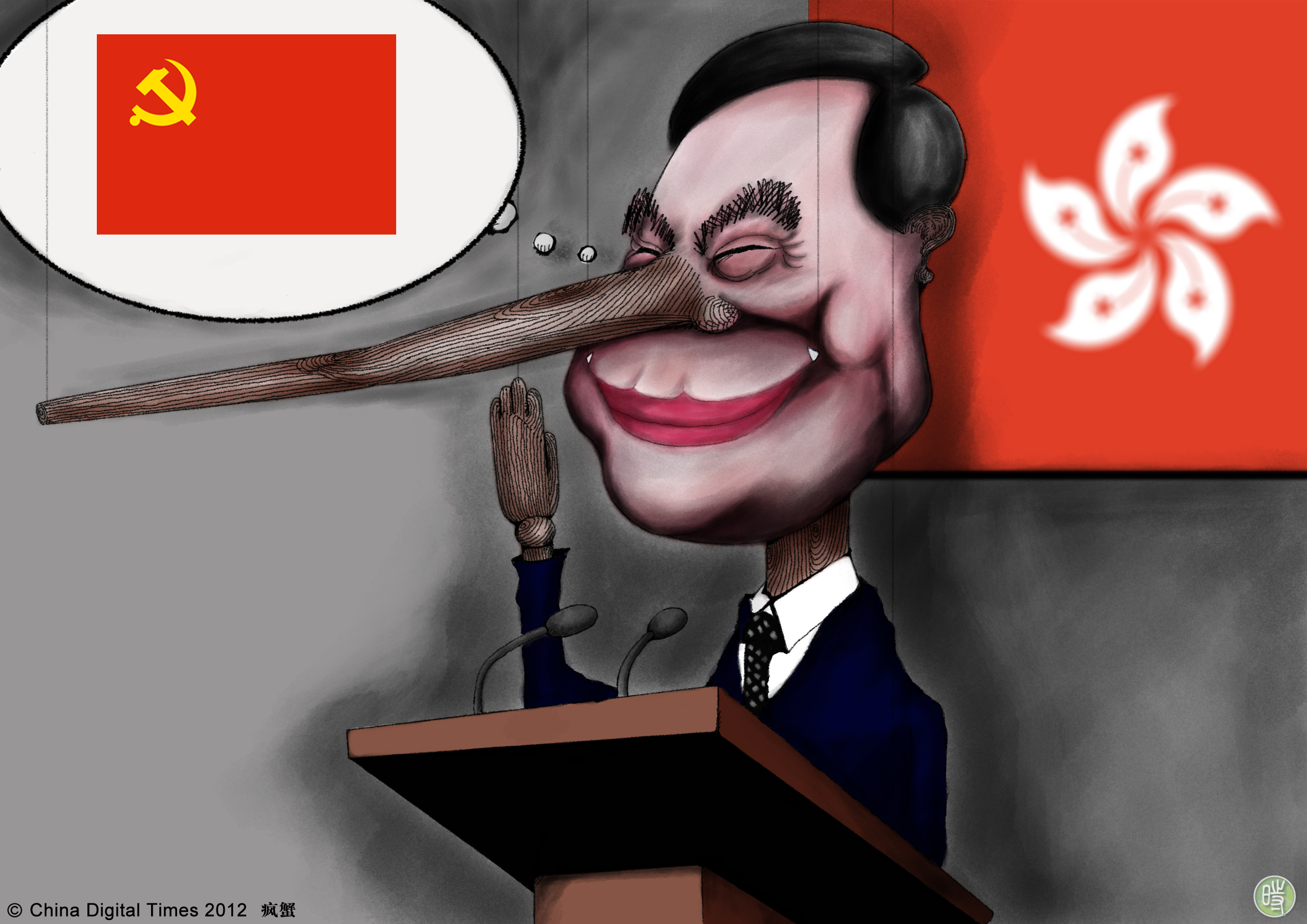 A month after pro-democracy protests were shut down by court bailiffs and police in Hong Kong, Chief Executive C.Y. Leung further inflamed protesters’ anger by calling out comments written by a student in a campus newspaper during a policy address. Alan Wong reports for the New York Times:

The student, Brian Leung, does not have as high a profile as Joshua Wong, the 18-year-old who was one of the public faces of almost three months of protests in Hong Kong last year. But it was an article by Mr. Leung, published in a monthly publication called Undergrad, that prompted a stern warning from Hong Kong’s chief executive on Wednesday.

“It advocates that Hong Kong should find a way to self-reliance and self-determination,” the chief executive, Leung Chun-ying, who is not related to the 20-year-old student, said of the article in his annual policy address. “We must stay alert. We also ask political figures with close ties to the leaders of the student movement to advise them against putting forward such fallacies.”

Brian Leung, who wrote the cover story of the February issue of Undergrad, the publication of the student union of the University of Hong Kong, and who was editor of the magazine at the time, said by telephone on Wednesday evening that his phone had not stopped ringing since the chief executive delivered his policy address. The February article, titled “Hong Kong People Deciding Their Own Fate,” also appeared in Hong Kong Nationalism, a compilation of articles published in September that was also cited in the annual address.

“Now, thanks to C.Y. Leung’s promotion, we’re printing more copies of the book in one to two weeks,” the younger Mr. Leung said, referring to the chief executive. The book had an original print run of 2,500 copies, but 3,000 more will be printed, he said. [Source]

Leung faced protest from within the chamber while presenting his annual address to the Legislative Council. From the Economist:

Before Mr Leung uttered a syllable of it, pro-democracy legislators raised yellow umbrellas—the symbol of last year’s “Occupy Central” protests which involved the blocking of several main streets by demonstrators’ encampments. Some of the legislators shook their fists and shouted that Mr Leung should resign. A few were removed from the chamber as Mr Leung, who is commonly known as C.Y., stood mute at the lectern. Others walked out, holding their umbrellas aloft.

Seemingly unruffled, Mr Leung set out his plans for boosting the availability of affordable housing and spending more on pensions—schemes that might help him to claw back at least some public support. But he also announced measures to “reinforce students’ interest in and understanding of Chinese history and culture”—an initiative that will raise the hackles of some who staged protests two years ago over plans to introduce “national education” into the school curriculum. Those demonstrations forced the government to back down. Now, it appears, Mr Leung is trying to revive the notion of instilling patriotism.

Mr Leung said the coming year would be a “crucial” one for Hong Kong’s constitutional development. He said his government would lobby legislators to support the electoral arrangements for 2017 that the central government in Beijing has prescribed; “a big step forward” for democracy, as he described them. Hong Kong, he said, had to be “wary of suggestions that deviate” from the territory’s constitution, the Basic Law. Officials say that the kind of democracy demanded by the tens of thousands of protesters’ who took part in the Occupy Central protests would be such a deviation. [Source]

After the policy address, legislators likened Leung’s comments to those of Chairman Mao Zedong. From Tony Cheung, Joyce Ng, Peter So, and Olga Wong at the South China Morning Post:

The accusation that Leung Chun-yin was behaving like Mao came from Lee Cheuk-yan, chairman of the Labour Party, during a 1½ hour question-and-answer session in the Legislative Council in which the chief executive was pressed several times to explain his opening remarks in Wednesday’s speech.

“Are you trying to stir up a Cultural Revolution in Hong Kong?” asked Lee, referring to the 10-year campaign started by Mao in the 1960s that purged dissidents, suppressed free speech and forced academics and capitalists to become farmers.

“Are those criticisms your only reflection on the issue of our youth following the Umbrella Movement? Are you trying to suppress freedom of speech until ‘one country, two systems’ is destroyed?”

Leung replied: “Freedom of speech means everyone is free to comment on views expressed by others.” [Source]

Meanwhile, the PEN American Center issued a report expressing concern about the status of press freedom in the territory and noted a number of ominous indicators of increased restrictions. From Chris Buckley and Michael Forsythe at the New York Times:

The report by the PEN American Center, a New York-based writers’ group, catalogs developments that it says amount to an alarming erosion of Hong Kong’s tradition of freewheeling news iaia, including self-censorship: journalists avoiding topics or skewing coverage at the behest of superiors.

“We’re ringing an early warning bell to say there are troubling signs,” Suzanne Nossel, the executive director of PEN American Center, said in an interview in Hong Kong. “When you see the pattern that comes together, it’s pretty disturbing, and there’s a sense of a deliberate hand in all of this.”

Hong Kong retained a high level of autonomy, with many rights guaranteed by law, after it returned to Chinese sovereignty from British rule in 1997. But many people in Hong Kong see Chinese political and economic power as encroaching on their autonomy. The PEN report warns that media freedom in Hong Kong has become more vulnerable since the street protests last year that exposed public discontent with the city government and the Chinese Communist Party.

“A free press is kind of an unnatural state for people who are not free,” said Mark Simon, a senior executive at Next Media Limited, whose flagship Apple Daily newspaper, which supported the pro-democracy protests, was blockaded by pro-Beijing demonstrators. [Source]

Read more about the 2014 protest movement in Hong Kong. The full PEN report is available here.