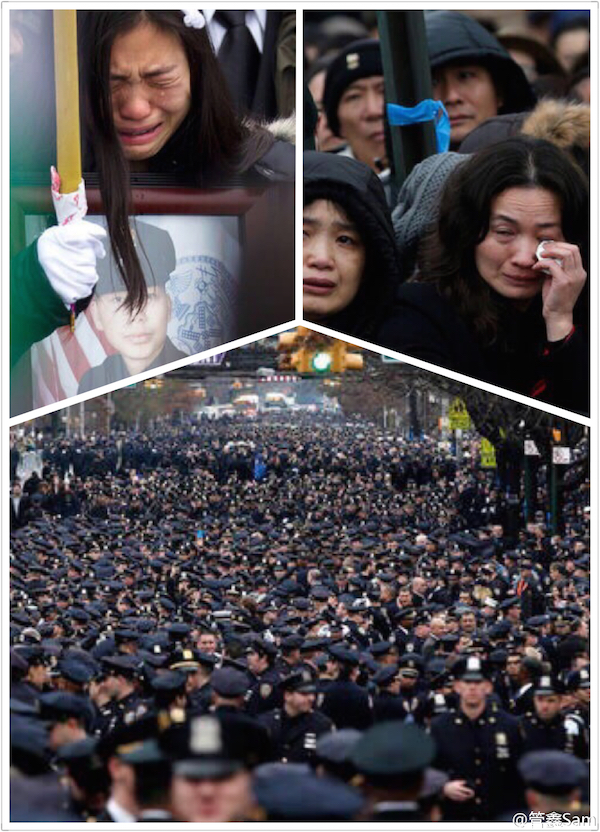 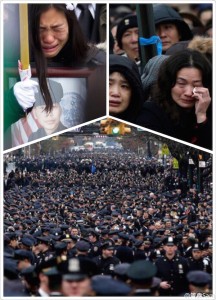 The funeral for slain NYPD officer and Chinese-American Liu Wenjian has drawn comparisons online to the respect paid to public servants in China–and to the way the police treat the public on the mainland.

Liu, who was shot dead in his squad car last month, was buried on Sunday. He and his colleague Rafael Ramos were killed by Ismaaiyl Brinsley, who then killed himself. Brinsley had earlier made statements on social media expressing his anger over police officers’ violence toward unarmed black men, precipitated by the deaths of Michael Brown and Eric Garner. Relatives of Liu flew in from China to pay their last respects.

Global Times Chief Editor Hu Xijin, notorious for putting a positive spin on bad situations, had only good things to say about Liu’s last rites. He instead criticized the treatment of the police force in China by the government and “public opinion” (舆论):

胡锡进: Watching the solemn funeral New York held for the Chinese-American police officer, I was deeply moved. China isn’t this good to its police. They’re at the beck and call of officials, toiling away in and putting themselves in danger, but they are paid little. There are often people within the people’s public opinion who incite revenge on the police–people like Yang Jia murder innocent officers, yet many people online applaud this. There are officers who have died and not gotten the respect they deserve. Let’s start to treat with kindness those who serve us. Support giving the police a raise. I beseech public opinion to respect them. (January 5, 2015)

Hu’s post angered Weibo users who view the Chinese police as corrupt and violent. “Can’t they eat their fill with all that protection money?” (各种收保护费还喂不饱?) asks 永远不会那么糟. Other users bring up the egregious behavior of officers in Taiyuan, Shanxi, who last month beat a group of migrant workers who were protesting for unpaid wages. One worker, Zhou Xiuyun, was photographed prostrate on the ground, an officer standing on her hair. Zhou died of her injuries. 架着太阳飘逸 replies to Hu, “When the police are stepping on the people’s hair, how are we supposed to send them off?” (警察踩着人民头发，你说该怎么送行呀).

Hu Xijin opened an old wound when he mentioned Yang Jia, who was executed in 2008 for killing six Shanghai police officers the year before. At the time, many netizens showed sympathy for Yang, who they believe was beaten by the police for allegedly stealing a bicycle. His swift and secretive trial raised human rights concerns in China and abroad. “My God! You’re bringing up Yang Jia?!” (我擦！还敢提杨佳?!) asked 明暗交界线的线 in a reply to Hu. “Why was Yang Jia humiliated by the police? Why didn’t the government ever explain anything to him? Will you make his court hearing public?” (杨佳当初是怎么被警察羞辱的，怎么一直不见官方的说法呢？庭审记录敢公布不?)

Elsewhere on Weibo, people are concerned that those public servants who have sacrificed their lives to protect the people are snubbed by the government. On January 2, five firefighters died in Harbin while battling a blaze in a warehouse. The local government released a statement praising senior officials for putting out the fire, only mentioning the casualties at the very end. The officers who died were not named. The statement caused an outcry online:

天道酬勤水秀峦峰: Seeing the highly regimented funeral for Officer Liu Wenjian in New York, I can’t help but mutter, “We should have an even grander funeral for the five firefighters in Harbin who sacrificed their lives.” (January 6, 2015)

On the Quora-like site Zhihu, someone has juxtaposed photos from Harbin and New York. In the top photo, a crowd of officials and doctors hovers over an injured firefighter. Below, hundreds of New York police officers line a road in Brooklyn, heads bowed for Officer Liu’s funeral procession.

Read the original comments cited in this post, plus more netizen commentary at CDT Chinese.