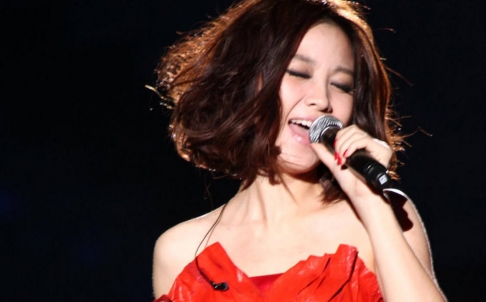 The state of journalistic ethics in China has frequently been lamented in recent years, from state media denunciations of “news smog” to industry insiders’ soul-searching about bribery. Xinhua describes the latest source of dismay:

Yao Beina, who sang on the “Frozen” soundtrack “Let it go,” died from breast cancer on Friday afternoon. She was 33. Yao’s career skyrocketed after she attended the Voice of China in 2013 and her death shocked many fans.

But the three reporters from Shenzhen Evening News who broke the story were accused of dressing up as medical staff and sneaking into the operation room to take pictures of deceased Yao as doctors removed her cornea for transplant.

[…] People’s Daily, the flagship newspaper of the Communist Party of China, published a commentary calling on reporters to have a better sense of “responsibility.”

“Journalists should not be bent solely for readership or click-rates,” said the commentary. “Influence always comes hand in hand with social responsibilities.” [Source]

The Shenzhen Evening News has apologized and said that the photos have been deleted, though its journalists reportedly protested at first that the family’s objections undermined freedom of the press.

Commercial pressures are often blamed for the current “era of corruption” in Chinese journalism, but David Bandurski argued last year at China Media Project that the roots lie deeper, in political control. Minnie Chan and Keira Lu Huang described other responses at South China Morning Post, including the suggestion that excesses in celebrity reporting are a side-effect of press restrictions in other spheres. (They also report that the photos were taken in the hospital morgue, not in an operating theater.)

The accusation sparked a debate over media ethics. “The Shenzhen reporters tried all kinds of means to get photos of Yao. It’s the result of the current deformed political and social situation on the mainland, as only entertainment reporters enjoy absolutely freedom of news-gathering and reporting,” said Qiao Mu, the dean of the Centre for International Communication Studies at Beijing Foreign Studies University.

[…] “On the mainland, entertainment reporters are even more ruthless than their Western counterparts, or even Hong Kong reporters, because there is no way for them to dig out any private stories about presidents, or even local party chiefs.”

[…] Professor Hu Xingdou, a political commentator at the Beijing Institute of Technology, said a widespread lack of respect for privacy should be blamed for the Shenzhen reporters’ “immoral behaviour”. [Source]

Last week, meanwhile, state broadcaster CCTV faced criticism over its misleading portrayal of a Chinese witness to the Charlie Hebdo shootings in Paris. On Monday, it emerged that China Daily had misrepresented edited quotes from an interview with writer Peter Hessler as an op-ed authored by him:

Just spoke with Peter Hessler by phone: he didn't write the China Daily piece. CD journo interviewed him, cut it, and slapped on his byline.

@jwassers the whole thing didn't quite read right–he doesn't express himself in such unnuanced terms. He's asked them to pull it.

Hessler told me it's a pity because many Chinese journos did excellent articles on his recent book tour. Probably a mistake talking to CD.

@joshchin @JamesFallows @comradewong This kind of thing has happened to me throughout my 26-year career. Fairly common practice.

The “op-ed” compared China, where Hessler previously lived, with Egypt, where he has been based since 2011. He discussed the comparison with The Washington Post’s William Wan in late 2013.

Updated at 14:08 PST on January 20: Hessler has posted a response on Facebook:

Yesterday, China Daily published an article under my byline, presented as an article that I had written solely about Egypt and China, and including much of my response on the question about post-revolution Egypt. But it omitted crucial parts, including the most important point: that I believe it’s harder to make a political change in China, where the system is deeper rooted than in Egypt, and thus the flaws are also more deeply rooted. I said that this is the reason why the current anti-corruption campaign will be a failure, because China is not addressing its systemic flaws. This material, among other things, was not included in the published article. (Nor did the paper print any of Li Xueshun’s answers, of course.)

After the article appeared, I asked China Daily to remove the article from their website and issue a retraction, because it should not have been under my byline and it did not accurately convey the substance of the interview. I offered to participate in a proper Q&A, provided that they made a statement disavowing the earlier article, and allowed me to approve the final edit of the Q&A before publication. China Daily removed the article from the English website, but Chinese translations have been picked up by various outlets. And the paper has refused to issue a retraction. [Source]