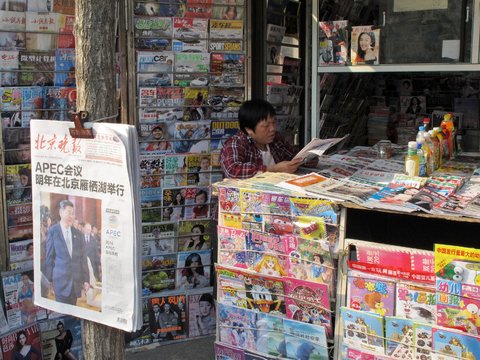 Last year, a News Morality Committee was established in an effort to rectify the morals of media employees whose “souls” have apparently departed. The editorial said that in Zhejiang Province, a “negative list” of news-industry morals was recently circulated to strengthen external supervision of newspapers, and the government in Hebei Province recently invited “societal supervisors” to reduce the number of reports related to “celebrities,” things that don’t seem right — and sex.

[…] The committee, which falls under the Communist Party’s central propaganda department, has already spread its scope to 16 provinces and has been tasked with strengthening the news ranks and resolving problems arising from news coverage, as well as fostering the “healthy” development of the news industry. [Source]

News organizations at all levels were urged to shut down local offices that fail to meet standards and dismiss unlawfully recruited employees, said a Wednesday statement by the publicity department of the Communist Party of China Central Committee, State Administration of Press, Publication, Radio, Film and Television, and the State Internet Information Office.

“Some news groups have too many local offices and employ personnel through unofficial channels, resulting in frequent illegal acts that severely undermine the spirit of journalism, harm the authority and credibility of news and lead to grave social consequences,” the meeting was told. [Source]

Chinese authorities have sent a series of warning signals to domestic news media this year, including guidance on handling of state secrets and involvement with foreign media. While press restrictions are often seen in purely political terms, there has been real soul-searching in the media itself over the moral state of Chinese journalism, particularly following New Express reporter Chen Yongzhou’s confession to bribe-taking last year. China Media Project’s David Bandurski has argued, though, that the Party bears much of the blame for this situation. “Perhaps next time, before we begin the debate about how money has corrupted China’s media,” he wrote in September, “we should open our wallets, pull out a 100 yuan note and remember whose face is on it.”