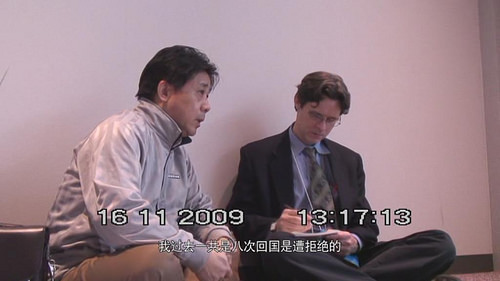 Feng Zhenghu speaking to a reporter, from the documentary “A Beautiful Life” (美好生活), produced by the Ai Weiwei Studio.

At six in the morning travelers began to enter Japan, flowing past my “bed.” They all looked at me in amazement, with sympathetic eyes: “How is this tramp sleeping on the doorstep of Japan? Doesn’t he have a country? He’s Chinese, why doesn’t he return to his homeland instead of being humiliated here in Japan? Does the Chinese government have no sense of honor? How can they be so foolish? His suffering might make a few Chinese officials happy, but surely the vast majority of his compatriots are grieved—this is China’s humiliation.” At this point, I can sleep no longer. After rising from bed, I head to the restroom to wash my face, return to eat a few biscuits, and start a new day.

I opened my phone’s mailbox to see an email from 2:24 a.m. with an article by Zhai Minglei titled “Blocking Feng Zhenghu From Returning Home is Our National Humiliation!” (不让冯正虎回国是我们的国耻！) Zhai is a well-known Chinese journalist formerly at Southern Weekly. What moved me was that after receiving threatening telephone calls from the Shanghai police, he still dared to tell the truth. I hope more reporters from the Chinese media will tell the truth, and that more domestic websites will carry their stories. Then Chinese leaders won’t be so muddleheaded, Chinese citizens will have more strength, and no one will stand for this national shame. China will change for the better, turning into a respected member of the international community.

Lunch was a couple of oat crackers and a cup of tap water. I had the instant noodles and electric hot water cup Ms. Chen from Hong Kong had given me, but I couldn’t use them for the moment. This is a public place, after all, and the only electrical outlet is in the restroom. I didn’t want to give management any more trouble. I should be careful while living under their roof. As long as I can charge my cell phone and computer, I’m satisfied.

It had been more than a week since my last bowel movement. I’ve eaten very little, had no oil, and have been sitting around and not getting any exercise. From my experience in prison, I knew this had to change, or the effects on my body would be huge. Over the past few days I’ve tried hard to adjust my diet and be more mobile. At one in the afternoon my intestines finally cleared. This signifies that my body has adjusted to these difficult surroundings. I can continue living here on Japan’s doorstep.

Yesterday after 10 p.m., I got a phone call from a women back in mainland China. She told me that she’d be going to Japan the next day. She asked me what I needed, and said she’d try to pass by with a delivery. I’m so moved by my fellow Chinese, strangers who have one after the other lent a helping hand.

I also got a call from Liu Yanzi* in Osaka, who said she’d intended to mail a pillow and blanket to me, but held off after seeing a report in Asahi Shimbun that my temporary home isn’t under Japanese jurisdiction, and that the Japanese post can’t reach me. Instead, she published an essay on the Internet calling on the Japanese government to take humanitarian responsibility for my plight.

At 2 p.m. the Financial Times Tokyo bureau chief gave me a call, informing me that he’d arrived at the fourth floor immigration hall. I asked him to wait for a bit, as I was already waiting for a visitor from China. A bit later, the woman who had called me last night arrived. She told me her surname was Gao and that Ai Weiwei has entrusted her to pay me a visit. She had a package for me with bread, all sorts of dried meats, drinks, and other food, and also socks, shorts, cold medicine, and a cute little stuffed alpaca. I was very happy. That little alpaca could keep me company, and at night he could be my pillow. As I was talking to Ms. Gao, Mr. Ai Weiwei himself called me from China. I thanked him for his concern. He and I are both using our actions to push for China’s progress.

Ms. Gao and I went together through the immigration inspection hall to the fourth floor. This was where the Narita Airport administration allowed the media to come interview me. I was interviewed by the Financial Times’ Tokyo bureau chief, and Ms. Gao took pictures. The last thing I said to the journalist was, “My situation reflects China’s double-sided nature. So many Chinese people are concerned about me, extending a hand to offer help, welcoming my return home. This is China’s real nature, the warmth of my homeland. But then there’s a handful of power-hungry individuals, really just a few people, who mercilessly refuse to allow me back in. They have turned a Chinese citizen into a castaway, unable to return to home and family, and left him to live on Japan’s doorstep in humiliation. This is China’s dark side, China’s shame.”

For dinner, I had two of the sausages Mr. Ai had sent. They were so delicious. It had already been nearly two weeks since I’d even smelled meat. While I was eating, the BBC called for an interview.

Ms. Gao hadn’t entered into Japan yet. She took a lap around the airport and returned to the immigration hall, not wanting to leave. She wanted to see how I spent my nights. But when the airport closes at 10 p.m., they don’t allow travelers to stay. I’m an exception. My temporary home is the immigration hall, a closed place where interviews with foreign reporters and photography are forbidden. But, as a traveler passing through, Ms. Gao had the opportunity to observe my situation first-hand. [Chinese]

*Liu Yanzi is a translator and activist living in Osaka, Japan. Back.