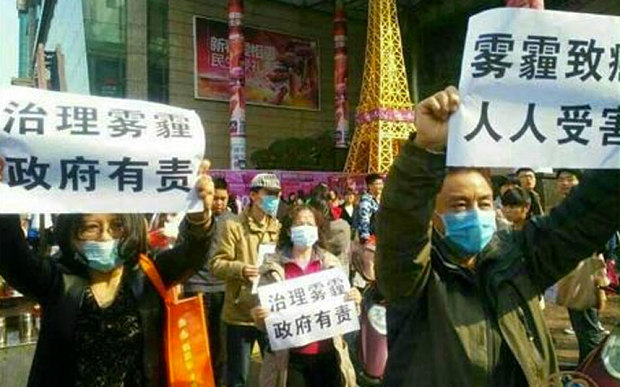 Following the release, and subsequent censorship, of the viral documentary “Under the Dome,” environmental protesters have been detained for publicly calling on the government to take action to clean up the nation’s air. Tom Phillips reports for The Telegraph:

Feng Honglian and Zhang Hui were taken into custody on Sunday, one day after China’s environment minister promised to “guarantee the public’s rights to supervise the fight against air pollution”.

[…] Photographs posted on the internet show the campaigners wearing face-masks and holding posters with slogans including: “Smog causes cancer and harms everyone”.

[…] Under the Dome appeared to have been the inspiration for Sunday’s protest outside government headquarters in Xi’an, said Luo Guangming, a resident who knows both Mr Zhang and Ms Feng.

[…] “From what I’ve seen, there have been heated online discussions in which some people think we are all responsible [for the smog] while others think the government should be held responsible. I imagine that after the debate the idea of a campaign came naturally.” Mr Zhang, who is in his 50s, was taken to the city’s Changlefang police station at around 4pm on Sunday, according to Weiquanwang, a human rights website. Ms Feng, who teaches at a local university, was detained at around 11pm on Sunday night after posting an online message in which she took responsibility for organising the protest. Both share an interest in environmental issues, Mr Luo said. [Source]

According to Wen Yunchao, the two have been released:

After her release, Feng posted an audio message to her supporters, saying she was accused by police of “slandering the national leader” in a satirical picture that poked fun at President Xi Jinping’s slogan of ruling by law. But she added that it was the anti-smog protest that got her into trouble.

“They were embarrassed to say directly it was our protest that was the problem,” said a transcript of the message circulated on the internet.

A policeman who answered the phone at the Dianzicheng police station in Xian said he had no knowledge of the incident.

The protest was likely prompted by an anonymous message that circulated online last week, which urged ordinary citizens to congregate on major city squares across the country last Sunday to protest about chronic pollution which it said caused fatal diseases.

At the ongoing National People’s Congress meetings in Beijing, where environmental issues have taken center stage, President Xi Jinping vowed to “punish, with an iron hand, any violators who destroy the ecology or environment, with no exceptions.”