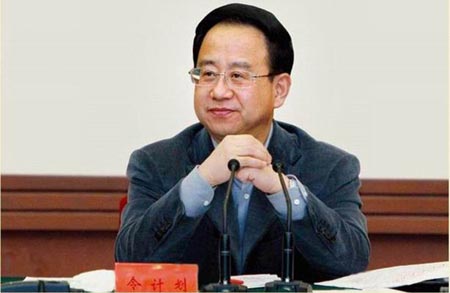 Reuters’ Ben Blanchard reports that a government spokesperson has denied speculation that Hu Jintao is implicated by the corruption probe into Ling Jihua, who was Hu’s trusted aide and a once promising candidate for promotion to top a Party leadership position. Ling’s political troubles began in 2012 after his son, Ling Gu, was killed in a deadly Ferrari crash that was subsequently covered up with the help of top Party officials.

Lu Xinhua, spokesman for the high-profile but largely ceremonial advisory body to parliament, said that it was wrong to believe that Hu, as Ling’s former boss, was the real target of the investigation.

“That is speculation without any basis. It is totally wrong,” Lu told a small group of reporters on the sidelines of the annual meeting of parliament, in rare comments on a sensitive case.

Sources have told Reuters that President Xi Jinping secured the blessing of Hu, his still influential predecessor, before launching the investigation into Ling, a sign that internal Communist Party harmony and respect for elders still holds sway in Xi’s sweeping crackdown on official graft.

[…] Lu said the stories about Ling’s son were “all just rumor at the moment”.

“I think if this did happen to the son, then certainly (the probe into Ling) is related,” he said. “However, I don’t think the son is the main reason. It’s mostly his own problems. I think it’s economic problems.” [Source]