Novelists Throw Spotlight on China’s Past and Present 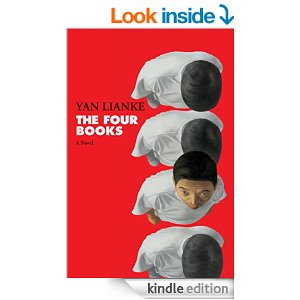 At The Telegraph, Tom Phillip’s takes a look at novelist Yan Lianke’s most recent work, set during the Great Famine of Mao’s Great Leap Forward, and the author’s decision to tackle the subject despite the fact that its sensitive nature will keep it from being published in China:

“As long as we remember, we can stop such a thing happening again. But without memory anything could happen. Perhaps not a famine but another kind of disaster,” the Beijing-based author of “The Four Books” said.

Almost 60 years have passed since Chairman Mao’s “Great Leap Forward” – a catastrophic attempt to turn China into an industrial superpower to rival Britain – unleashed chaos in the Chinese countryside and resulted in the deaths of millions of people.

However, Beijing continues to resist revisiting the Communist Party’s role in the famine for fear it would undermine its authority and grip on power. The famine is still officially refered to as “The Three Years of Natural Disasters”.

[…] “It isn’t mentioned in textbooks, in media reports, in literature,” Mr Yan said. “They have achieved their aim – young people born in the 1980s and 1990s have no idea about this part of history. One of literature’s most important tasks is to keep the memory alive.” [Source]

Yan, who won the prestigious the Franz Kafka Prize in 2013, has previously commented on the state-sponsored “historical amnesia” that afflicts China’s younger generation. A review of “The Four Books” from Cameron Dueck at The South China Morning Post notes that Yan’s focus on sensitive political issues has kept his work from mainland publication in the past:

Yan – winner of last year’s Franz Kafka Prize and a finalist for the Man Booker International Prize – is both one of China’s most esteemed authors as well as one of its most censored. He spent two decades as a military propaganda writer, but after the publication of The Joy of Living, a story about a village of disabled peasants, he was asked to leave the army. His 2006 novel Dream of Ding Village, about impoverished peasants who contract Aids via illegal blood selling, won the Man Asian Literary Prize but was banned on the mainland.

Yan wrote The Four Books for the overseas reader, abandoning any hope that it would be published in China even before he began writing it. “I’ve always dreamed of being able to write without any regard for publication. The Four Books is [at least partially] an attempt to write recklessly and without concern for the prospect of getting published,” he says in the foreword. [Source]

Also see a review of “The Four Books” from David Evans at the Financial Times.

Fellow novelist Yu Hua’s work has likewise been inspired by historical events that Party leaders continue to keep in the dark, and the outspoken author has been known to critique sensitive issues in contemporary China. His latest novel “The Seventh Day” uses subtlety, satire, and surrealism to address topics such as the widening gap between rich and poor, the one-child policy, forced demolition, corruption, and political repression. From Ken Kalfus at the New York Times:

The novel opens with Yang Fei, a poor, freshly deceased tutor, late for his ­appointment at the local crematorium. There’s heavy traffic, and the 203 bus isn’t running. When he finally makes it to the facility, he discovers that the ­inequalities that separate the living continue to ­divide the dead. The V.I.P.s have their own ­waiting area, with comfy armchairs. Newly dead officials boast of burial plots that await them on mountain peaks with ocean views. Their “organic headstones” have already been ordered. Realizing that he doesn’t have adequate funerary garments or even an urn, Yang Fei declines to ­answer when his number is called. ­Instead, he leaves the crematorium. On a journey of post-mortem discovery, he is eventually reunited with his beloved ­father and reconciles with his ex-wife, who has just committed suicide.

In Yang Fei’s limbo walk, the dead ­offer lurid accounts of corruption, police ­violence, political repression and the demolition of homes with their residents still inside, along with tales of the day-to-day mistreatment suffered by ordinary Chinese at the hands of the powerful and the wealthy. Some of these stories, which read as if they had been drawn from the country’s sensationalist press, provide occasions for broad satire — as when a cross-dressing prostitute steals into a police station to attack the cop who arrested and tortured him. The policemen defend their failure to protect a colleague: “People who arrive at the public security bureau with backpacks are normally there to deliver bribes. . . . Who could have known that this guy would pull out a knife?” […] [Source]

The Party’s propagation of official history forces many would-be historians underground, and tightening restrictions on the news media can land journalists behind bars for venturing too far into politically sensitive territory. In concluding a review of “The Seventh Day,” Cameron White describes a “new urgency” in Yu Hua’s  use of fiction to reflect contemporary reality. From The Wall Street Journal:

[…] “The Seventh Day” plays out over the course of a week, and even when characters reminisce about days long gone—the book takes place in the afterlife, fertile ground for self-reflection—their tone is permeated by the anxieties of contemporary China. […]

[…] The entertaining and intriguing afterlife imagined by Mr. Yu often serves as a canvas for the author to comment on the current state of China. […]

[…] The novel weaves together a series of deaths that reflect back on the world of the living. It shows how, in a time when increased censorship hampers the work of journalists in China, fiction offers another way to tell the story of now. That’s ultimately what makes Mr. Yu’s departure from epic so timely: In narrowing his lens, his work carries new urgency. [Source]