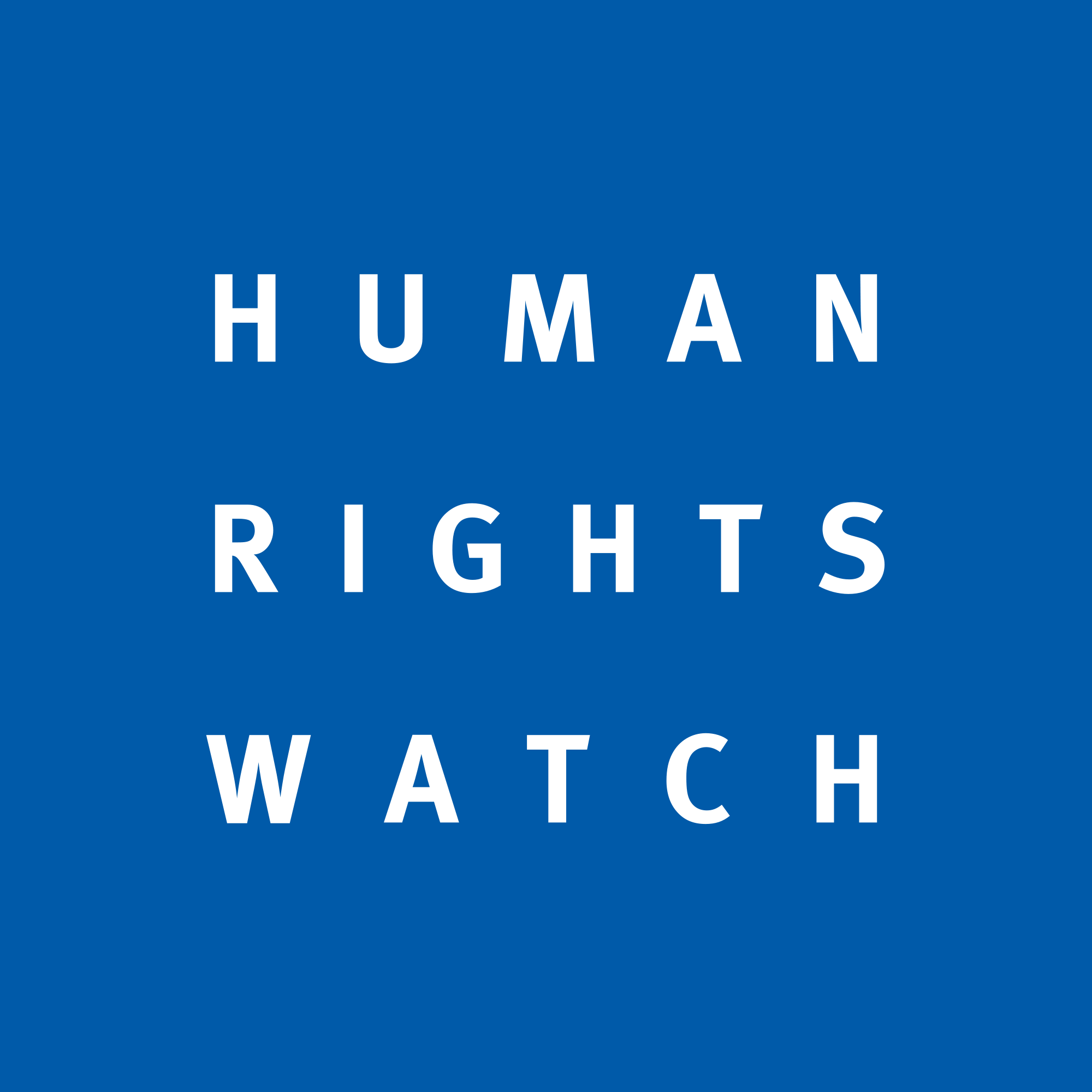 Human Rights Watch released its 2015 World Report on Thursday, covering more than 90 countries in 644 pages. The organization sharply criticized China for eroding rights on several fronts, but also faulted the international community for failing to confront it.

Under President Xi Jinping, the Chinese government and Communist Party have unleashed the harshest campaign of politically motivated investigations, detentions, and sentencing in the past decade, marking a sharp turn toward intolerance of criticism, Human Rights Watch said today in its World Report 2015.

“Under President Xi, China is rapidly retreating from rights reforms and the Party’s promise to ‘govern the country according to law,’” said Sophie Richardson, China director at Human Rights Watch. “Repression of critics is the worst in a decade, and there appears to be no end in sight.”

[…] This year’s World Report also flagged weakening international concern about human rights abuses in China. Some, including United Nations Secretary General Ban Ki-moon, instead praised the government for “its contributions to the promotion of … human rights.” China continues to refuse meaningful engagement with UN human rights mechanisms and voted down resolutions spotlighting abuses in Belarus, Iran, North Korea, Sri Lanka, Syria, and Ukraine. China repeated its calls for “political solutions” in Syria, Sudan, and South Sudan in 2014, but took steps that prolonged human rights crises in all three.

“China under Xi Jinping is escalating hostility to human rights and democratic pressures, at home and abroad, yet the international community remains largely silent,” Richardson said. “Abetting the systematic suppression of basic freedoms is a short-sighted and dangerous policy, one that only encourages Beijing’s growing intransigence.” [Source]

The report’s chapter on China includes sections on civil society and activism; Xinjiang and the government’s response to violence in and originating from it; Tibet, including the forced resettlements that HRW has highlighted in the past; Hong Kong and its democracy protests; freedom of expression and religion; the rights of women and the disabled; sexual orientation and gender identity; and foreign policy and international relations.

In his introductory essay, director Kenneth Roth focused on government’s reactions to threats from organizations such as the Islamic State, Boko Haram and Al Shabaab, and warned that abandoning human rights in order to combat them would only prove counterproductive.

The Chinese government’s approach to Xinjiang, the northwestern province that is home to the Muslim Uighur minority, is to respond to complaints about human rights abuses with more human rights abuses and restrictions. Beijing claims that its crackdown is necessary to fight separatism and terrorism, but its tactic is to impose some of the most draconian and discriminatory policies against Uighurs, including prohibitions on wearing beards and veils, restrictions on fasting, and overt discrimination with respect to religious education.

The escalating deadly attacks against civilians and security forces in Xinjiang are a grave concern for the government. But the haste with which the government attributes violence to “Uighur terrorists”—while rarely producing evidence and routinely denying suspects the right to a fair trial—creates a vicious cycle in which already-repressed Uighurs feel under constant siege from the state. From the little information made publicly available, it is impossible to assess with any confidence whether those convicted and often sentenced to death are responsible for violence and whether the government’s severe counterterrorism measures are aimed at the right people.

As illustrated by the extraordinarily harsh life sentence handed down in September to Ilham Tohti, a moderate Uighur economist, the state remains unwilling to distinguish between peaceful criticism and those who engage in violence. [The looming prosecution of rights lawyer Pu Zhiqiang on charges including inciting ethnic hatred and separatism offers another example.] Viciously prosecuting peaceful criticism, leaving virtually no room for religious or cultural freedom, and expanding an economic strategy in which Uighurs cannot compete equally with Han Chinese migrants is a recipe for increased violence.

[…] In all of these cases, policymakers inevitably can cite seemingly good reasons for downplaying human rights. Human rights require restraint that can feel antithetical to a “do what it takes” attitude that often prevails in the face of serious security challenges. But the last year shows how short-sighted that reflex can be. Violations of human rights often sparked these security challenges, and their continued violation frequently aggravates them. [Source]

HRW has previously warned of the strong surveillance provisions in China’s draft anti-terrorism law. An additional essay in the 2015 report by Cynthia M. Wong highlights the corrosive effects of such measures in the context of American and British activities.

Many of the same concerns about China were highlighted in Freedom House’s Freedom in the World 2015 report. (The organization also released a China-specific report, The Politburo’s Predicament, in December.)

An aggressive anticorruption campaign reached the highest echelons of the party during the year, and party and government bodies pushed forward incremental reforms of the petitioning system, household registration (hukou) rules, and laws on domestic violence. In October, the CCP Central Committee convened for its fourth plenum, focusing on improvements to the legal system.

However, such initiatives were accompanied by hard-line policies on political freedoms and civil liberties and a rejection of judicial oversight of party actions. Harassment of previously tolerated civil society organizations, labor leaders, academics, and state-sanctioned churches intensified. Internet controls continued to tighten, and several activists who had been detained in 2013 were sentenced to prison on politically motivated charges. Crackdowns related to the 25th anniversary of the Tiananmen Square massacre, the prodemocracy Umbrella Movement protests in Hong Kong, and an Asia-Pacific Economic Cooperation (APEC) meeting in Beijing resulted in hundreds of new detentions.

Harsh state repression of the Uighur population’s ethnic and religious identity, combined with long-standing socioeconomic grievances, have apparently fueled an escalating cycle of radicalization, with several deadly attacks attributed to Uighur extremists during 2014. The government responded with heavy-handed collective punishment and more intrusive restrictions on religious identity. Meanwhile, Uighur scholar Ilham Tohti was sentenced to life in prison in September for supposedly inciting separatism, signaling the authorities’ intolerance of even peaceful advocates of Uighur rights and interethnic dialogue. [Source]

Developments in Hong Kong are covered in a separate section:

China’s growing political influence over Hong Kong encountered dramatic public resistance in 2014. In August, the Standing Committee of China’s National People’s Congress (NPC) issued a decision that would allow a popular vote for chief executive in the territory for the first time in 2017, but would empower an effectively pro-Beijing committee to control nominations for the contest. Prodemocracy groups criticized the decision, arguing that it violated promises of eventual universal suffrage that China had made under Hong Kong’s Basic Law and in a corresponding 2007 NPC Standing Committee decision.

Long-standing disagreements between the authorities and a large section of the population over the degree of free choice in future elections came to a head in response to the ruling. Large student-led protests broke out in September, with demonstrators establishing encampments and barricades at several points in the city center. The occupations continued for more than two months, though the police periodically attempted to clear them, at times using tear gas and batons. The police were also accused of enabling violence by counterprotesters with alleged links to organized crime groups. The last encampments were removed by mid-December.

Overall, the report concluded, there was “a disturbing decline in global freedom in 2014,” though political scientist Jay Ulfelder has argued that Freedom House’s data do not support such a negative assessment.