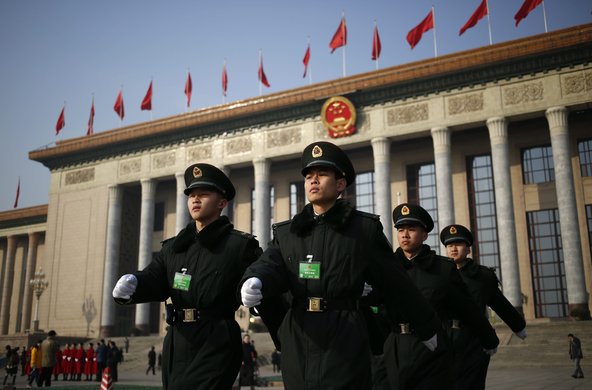 Respected China scholar David Shambaugh’s prediction a week ago that “the endgame of Chinese communist rule has now begun” provoked “stunned” initial reactions, followed by a broad wave of mostly dissenting arguments. In an interview with The New York Times’ Chris Buckley, Shambaugh addresses some of his detractors’ objections, and explains his loss of faith in the Party’s ability to adapt. “Atrophy of late-stage, single-party Leninist, and other authoritarian, states is a normal, natural and ever-present condition,” he writes, adding that “no China watcher can remain wed to arguments that have lost their empirical basis.”

[…] I am the first one who would applaud a return to Zeng Qinghong-like political reform. The party has choices. Repression may be its “default mode,” but it is not its only option. Opening and proactively managing political change is an alternative.

True, if they tried that — again — there is no guarantee that they could keep control of the process and, as in the Soviet Union, the reforms could cascade out of control, and they would fall from power anyway. So, they have a kind of Hobson’s choice or Catch-22. They can repress and bring about their own demise or they can open up and still possibly bring about their own demise.

But it is not quite so simple. That is, even if they lightened up on the repression, the other elements affecting the party, economy and society are already hemorrhaging to the point that they may not be able to reverse or halt the slide. […] That said, my views about the protracted process of atrophy and decline of the party are more nuanced than the catchy headline used by The Wall Street Journal.

[…] Chinese politics since Mao has undergone a series of opening-closing cycles (known in Chinese as fang and shou). Normally the open phases last about five to six years and the closing cycles two to three years. We are currently in year seven of “closing.” An optimist would say that we are well overdue for an opening period! I would like to be optimistic, but my analytical judgment, unfortunately, tells me otherwise. [Source]

Beijing has managed to dodge disaster before, and the fact that there remains robust debate in the leadership about the obstacles to reform is a small positive sign amidst these new difficulties. Xi might be attempting to dominate decision-making, but he’s hasn’t shut down political dialogue entirely, probably because he knows that it sometimes provides unusual ideas to address China’s new problems.

Still, the just-concluded legislative sessions seem to be another example of the deinstitutionalization of Chinese politics under Xi, where change is driven by a small group that doesn’t always agree on what’s wrong or how to solve it. Months from now, these meetings won’t be seen as harbingers of reform, so much as another lost opportunity. [Source]