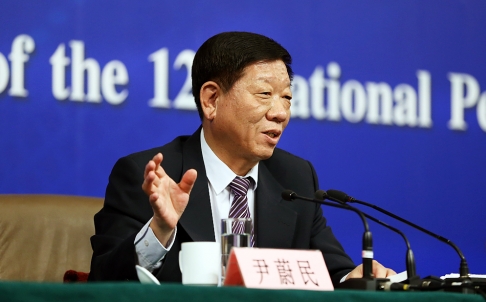 Yin Weimin, minister of human resources and social security, said the government will gradually raise the official retirement age, which is as low as 50 for some female workers, but stressed that any policy changes will be phased in over five years.

He did not say when retirement ages will be raised.

Analysts have long warned about China’s state pension crisis and the severe funding shortage, with some estimating that the cash shortfall could rise to as high as nearly $11 trillion in the next 20 years.

[…I]n coming years, the proportion of Chinese over the age of 60 will rise to 39 percent of the population, from 15 percent now, Yin said.

[…] And as China’s economy slows to an expected 25-year low of around 7 percent this year, Yin cautioned that the country’s labor market will also face greater pressure. […] [Source]

Coverage from the South China Morning Post notes that Yin said a detailed plan for the age raises would be rolled out by 2017.

With social stability a constant goal for Beijing, the government has made urban job creation a top priority amid the ongoing economic slowdown. While last year’s breached target of 10 million new urban jobs has again been set for 2015, labor minister Yin reported that the beginning of this year has seen a slowing in job creation, and a private study suggests that hiring won’t likely pick up soon. From Magnier at the Wall Street Journal:

[…] The survey, which is seasonally adjusted, covered 4,200 employers and showed the lowest level of hiring sentiment since the third quarter of 2009, Manpower said.

[…] Strong employment remains a top priority for China given the importance of social stability in the one-party state. […] [Source]