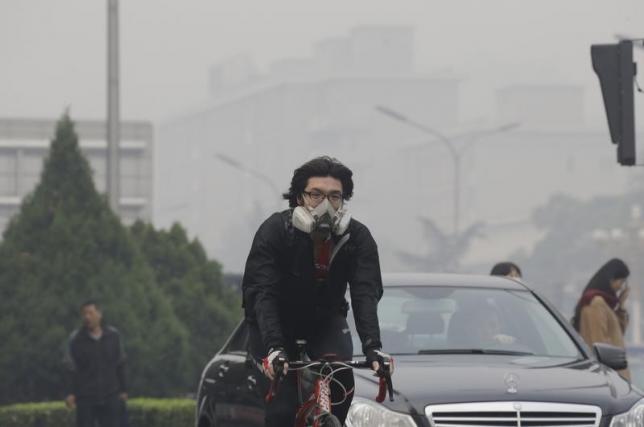 China will soon surpass the U.S. as the world’s top emitter of greenhouse gas, according to two new studies. Alister Doyle at Reuters reports:

China is poised to overtake the United States as the main cause of man-made global warming since 1990, the benchmark year for U.N.-led action, in a historic shift that may raise pressure on Beijing to act.

China’s cumulative greenhouse gas emissions since 1990, when governments were becoming aware of climate change, will outstrip those of the United States in 2015 or 2016, according to separate estimates by experts in Norway and the United States.

[…] “A few years ago China’s per capita emissions were low, its historical responsibility was low. That’s changing fast,” said Glen Peters of the Center for International Climate and Environmental Research, Oslo (CICERO), who says China will overtake the United States this year. [Source]

The forecast comes amid relatively favorable reports of a decline in China’s overall coal output, which dropped more than two percentage points over the past year, and of a corresponding drop in China’s carbon dioxide emissions. From Feifei Shen and Ehren Goossens at Bloomberg Business last month:

Total carbon emissions in the world’s second-biggest economy dropped 2 percent in 2014 compared with the previous year, the first drop since 2001, according to a Bloomberg New Energy Finance estimate based on preliminary energy demand data from China’s National Bureau of Statistics.

[…] “This gives me even more hope that humankind will be able to work together to combat climate change, the most important threat facing us today,” [International Energy Agency chief economist Fatih] Birol said in the IEA statement.

The China results show that the country’s battle to rein in pollution is having a tangible effect. The world’s biggest carbon emitter, has poured money into clean energy sources such as solar, wind and hydro developments, while cutting its dependence on coal.

China led in renewables last year with investments of $89.5 billion, accounting for almost one out of every three dollars spent on clean energy in the world, according to BNEF figures released in January. [Source]

Coal’s local impact also hit the headlines this weekend, a month after the viral success and subsequent censorship of air pollution documentary “Under the Dome.” On Sunday, tens of thousands of residents in northeastern Guangdong staged a large-scale sit-in demonstration to protest against a local government proposal for a new coal-fired power plant. Mimi Lau at South China Morning Post reports:

The demonstration began with thousands of people staging a peaceful sit-in outside city government offices at about 8am. Many wore surgical masks and stickers denouncing the plant.

Police dispersed the crowd at around 10am, sending the protesters into the streets, where the numbers quickly swelled to around 10,000 before noon.

[…] The city is home to the Xinfengjiang Reservoir, a major source of water for Hong Kong, and already has one coal-fired plant supplying electricity.

Shenzhen Energy is spending 8 billion yuan (HK$10.12 billion) to build the new plant, which will generate 11 billion kWh annually. The Shenzhen government is the major shareholder in Shenzhen Energy. [Source]

Read more on China, coal, and climate change via CDT

Protests such as the one in Guangdong highlight the potential political costs of unresolved environmental problems. To avoid wider social unrest, the Chinese government is taking further steps to address the country’s environmental challenges. David Stanway at Reuters reports:

With pollution identified as a major source of unrest, China’s ruling Communist Party has promised to tackle a host of environmental problems brought about by more than three decades of breakneck economic growth, an environment ministry think tank said on Thursday.

The Institute of Environmental Planning, run by the Ministry of Environmental Protection, said China’s economy has now “basically said goodbye” to scarcity and the state was now having to meet rising public demand for a cleaner environment.

“There is a huge gap between how fast the environment is being improved and the how fast the public is demanding it to be improved, and environmental problems could easily become a tipping point that leads to social risks,” the institute said in a report published by the official China Environmental News.

[…T]he institute said China’s war on pollution was likely to become easier as a result of structural changes in the economy, with traditional heavy industrial output now peaking, though there could be unforeseen environmental consequences stemming from the country’s attempts to diversify into new industries. [Source]

For businesses, meanwhile, combatting environmental challenges offers commercial opportunity. In an excerpt from his book “The Greening of Asia: The Business Case for Solving Asia’s Environmental Emergency,” Mark L. Clifford describes one such company called Goldwind, a wind turbine manufacturer based in Xinjiang, and how its founder Wu Gang became involved in the country’s renewable energy industry. From China Business Review:

Wu and a group of colleagues founded Goldwind in 1998, as a successor company to Xinjiang Wind Energy Company. The goal was “establishing Xinjiang as the birthplace of China’s domestic wind energy industry.” Fast-forward to 2013, and Wu’s Goldwind was China’s largest manufacturer of wind turbines and the world’s second largest, with a 10 percent global market share that year. It had installed more than 14,000 turbines, on every continent except Antarctica, capable of producing 19,000 MW of electricity, more than the entire installed generating capacity of Switzerland.

How did Goldwind grow so big so fast in an industry where China had no expertise only twenty-five years earlier? The company’s success reflects a combination of traits often seen in China’s best companies: strong engineering skills, an ability both to acquire technology from other companies and to develop its own technology, and political savvy in its industry. That the wind industry is enjoying a period of rapid growth, both in China and globally, has provided a critical boost. So has the backing of Chinese national policies. [The following section of the book takes] a closer look at the role each of these factors has played in Goldwind’s success. [Source]