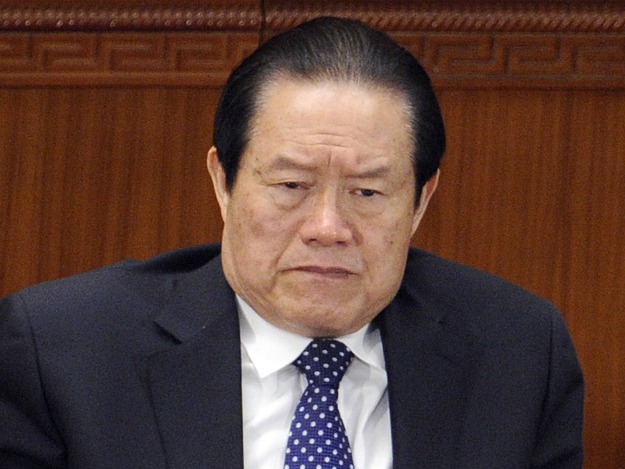 Zhou took the advantage of his posts to offer interests to others and illegally accepted a huge amount of money and property, according to the indictment.

Zhou’s abuse of power resulted in grave losses of public property and interests of the country and the people. The social impact was “bad” and his act was “particularly serious,” according to the indictment.

He also intentionally disclosed state secrets and his act was “particularly serious,” according to the indictment.

Prosecutors informed the defendant Zhou Yongkang of his litigation rights, interrogated him and heard opinions of his lawyers, according to the SPP’s statement. [Source]

Chris Buckley of the New York Times, who was part of a reporting team that revealed the accumulation of wealth among Zhou’s extended family, has more details on the charges:

Mr. Zhou will be the most senior Chinese Communist Party official to face trial on corruption charges, and is the most powerful figure yet singled out by President Xi Jinping’s campaign to eradicate graft. The statement from the prosecution office, which oversees major corruption inquiries, indicated that Mr. Zhou had scant hope of clemency.

Mr. Zhou will stand trial in Tianjin, a northern port city near Beijing. The prosecution office said Mr. Zhou’s crimes spanned much of his career as a party official, from his time as an oil executive to his final post in the Politburo Standing Committee, when he wielded immense power overseeing the courts, the police, domestic security forces, and intelligence apparatus. The announcement did not give a date for the trial. [Source]

The investigation into Zhou has led to the detention and questioning of hundreds of his family members and business associates, including his son Zhou Bin who has also been arrested on suspicion of “involvement in illegal business operations.” But while the extensive investigation into Zhou indicates the gravity of Xi Jinping’s battle against corruption, many observers suspect that Zhou has been singled out for political reasons rather than purely legal ones. AP reports:

Although the case against Zhou has been touted by state media as an example of the party’s determination to fight corruption regardless of one’s rank, it also has been widely perceived as part of factional politics in the ruling party’s uppermost echelon and the removal of a potential rival for Xi.

“Corruption commonly exists among the party’s senior officialdom, and so it looks like Zhou is another example of being the loser of a power struggle,” said Zhang Lifan, a Beijing-based commentator and historian. [Source]

Last month, the Supreme People’s Court issued a report stating that Zhou, together with his political ally, fallen Chongqing Party chief Bo Xilai, had “trampled on rule by law, wrecked party unity and engaged in nonorganizational political activities,” leading some to speculate that charges against him would include “endangering state security,” which did not come to pass. Based on the charges against him, Zhou could still potentially be given a death sentence.

Note that the state secrets charge against Zhou is *not* the state security offense. Doesn't carry the death penalty. Carries maximum 7 yrs.

Court officials have said Zhou will have an “open” trial; the same was promised for Bo Xilai but was not fully carried out in practice.