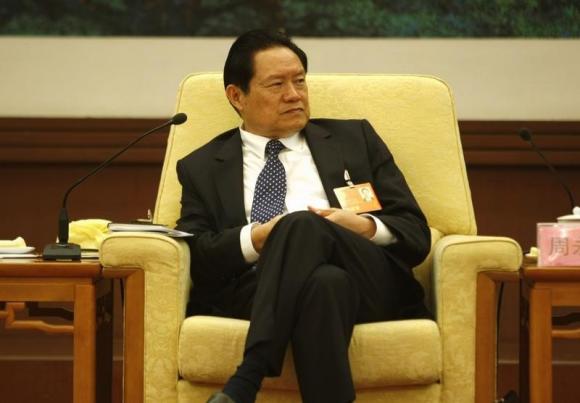 China will hold an “open trial” for fallen domestic security tsar Zhou Yongkang, the head of China’s top court said, state media reported on Friday, in an attempt to show transparency though the super-sensitive trial will likely be far from open.

Asked whether the trial of Zhou Yongkang and other felled senior officials would be open, Zhou Qiang, president of China’s Supreme People’s Court, answered that it would be “open in accordance with the law”.

[…] Zhou Yongkang was one of the most powerful politicians of the last decade, and the party will not allow itself to be embarrassed by revelations he might make in court. The state secrets part will also certainly be heard behind closed doors. [Source]

The August 2013 “open trial” of fallen Chongqing Party chief Bo Xilai, a former political ally of Zhou’s, may offer a sign of what to expect. Foreign media were told that they were welcome to attend in principle, but that there was no space available:

Q: "Can we attend the Bo Xilai trial?" Jinan court official: "Of course! But the namelist is already full so you can't." zzz

A rumored video feed from the courtroom to a nearby hotel also failed to materialize. Instead, the court published transcripts, images and video clips through an official weibo account. State media hailed this as a breakthrough demonstration of transparent rule of law, but reactions elsewhere were mixed. Bo saga chroniclers Wenguang Huang and Pin Ho described it as “a sign of progress,” and rights lawyer Liu Xiaoyuan reportedly commented that live weibo coverage should become routine. Others, however, dismissed the feed as a mere fig leaf for authorities’ continued monopoly on information.

Indeed, the stream dwindled as the trial wore on and some Chinese expressed inharmonious sympathy with the defendant. Disparities soon emerged between the offical account and others leaking from the courtroom. Details reportedly omitted from the transcripts included Bo’s claim that investigators threatened his family to extract a confession, and that he had fainted 27 times during hundreds of interrogations. Other testimony, such as Bo’s alleged statement that his wife Gu Kailai “had become crazy,” was reportedly misrepresented. Bo’s unsuccessful appeal against a life sentence took place in private two months later.