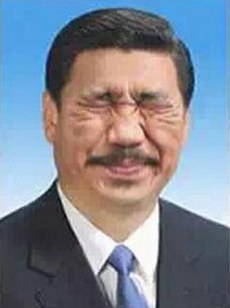 Dai Jianyong, a photographer who frequently posts images of people with contorted faces—known to his social media followers as “chrysanthemum faces”, referring to a Chinese slang word for “anus”—has reportedly been detained in Shanghai for posting a similarly doctored photo of Xi Jinping. AP reports:

Authorities have detained an obscure Chinese artist after he posted online a humorous portrait of President Xi Jinping, his wife said Thursday.

[…] Chinese artists have long walked a fine line between what they can express without getting into trouble with authorities. Posting politically sensitive work online has become one clear red line, especially under Xi’s more hard-line rule.

[… His wife Judy] Zhu said Dai previously created collages of former Chinese President Hu Jintao covered with the heads of random people, but had not received warning that anyone in government was paying attention. She said about a dozen police were waiting for the couple when they returned home Tuesday.

“It was just a playful thing he did,” she said. “I don’t think there was that much political intent behind it.” [Source]

According to a copy of his warrant seen by Radio Free Asia, he has been detained on suspicion of “picking quarrels and stirring up trouble”—a charge commonly levied on political activists over recent years. RFA has also published the offending photo, supplied by their audience: As rights groups have noted a steady erosion of freedoms in Xi Jinping’s China, the notoriously little space that has long existed for free expression has become even tighter. This has included a legal means to punish those who post vaguely defined “rumors” on social media—a platform once lauded for it’s ability to free up speech in China. Political humor—which, Dai’s wife suggests the above image was not meant to be—has also been targeted, as seen in a recent Twitter smear campaign against cartoonist Badiucao seemingly conducted by members of the “Fifty Cent Party,” and also in the earlier, state media fueled smear campaign of cartoonist Rebel Pepper. Rebel Pepper is currently living in Japan, afraid that his safety would be in jeopardy upon returning to China. The cartoonist recently posted a humble request for donations from his supporters.

Following Dai’s detention, several related keywords have become blocked from Weibo search results. The artist’s name, Dai Jianyong (戴建勇) is not searchable, nor is coca, the letters that follow his name in his Weibo handle (his account, @戴建勇coca, however, is still online at Weibo). Paralyzed brother (麻痹哥), a nickname for the artist derived from his the atrophied facial expression characteristic in his photos, is also unsearchable. Diao+tele (刁＋特勒), a play on the previously (and continually) blocked Xi+tele (习＋特勒), which sounds like the Chinese word for “Hitler” (Xītèlè 希特勒), is also blocked. Netizens had commented that the offending mustachioed picture of Xi made him vaguely resemble the Nazi dictator.