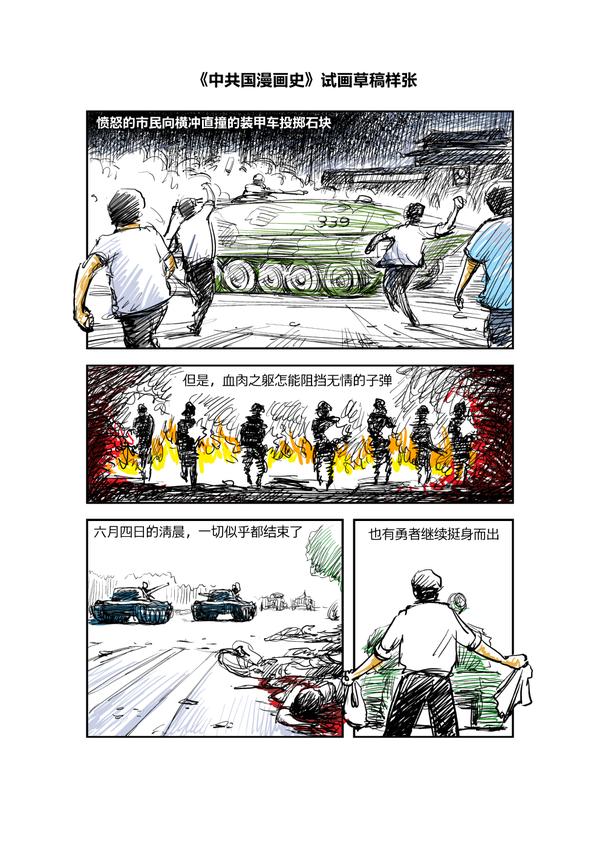 Wang Liming, the political cartoonist known as Rebel Pepper (变态辣椒), went to visit Japan last summer, and has not returned to China since. In July, one of his pieces lampooning mainland counter-protesters in Hong Kong apparently spurred an online smear campaign against him. A bulletin board system post labelling him a “Japan-worshipping traitor” made it as far as the Weibo account of the Global Times. Now Rebel Pepper has posted a letter to Twitter describing his current situation and reluctantly asking supporters for donations:

I’m ashamed that I have to ask for help from everyone like this, because there really is no better way.

When I got to Japan last May, the Taobao store I opened with my friend was doing brisk business. I was in a good mood. My partner told me that, barring the unforeseen, by the end of the year my monthly income could be 50,000 RMB ($8,053). This is a sizable sum for me. I could live comfortably in any country on this kind of money. I could see the goal of “financial freedom” getting closer.

My partner warned me repeatedly not to post any political cartoons, since I would need to hold onto my Weibo account in order to reach that volume of business.

I carefully censored myself. I didn’t look at the news that would enrage me to the point that I couldn’t help but move my pen. I wanted to write more about sightseeing in Japan, to repost more funny and interesting things. That should have been fine, right?

But this whole enterprise wouldn’t be so yielding.

One day in the end of July it all came to an end. (Right now I can only guess that Party higher-ups can seen the cartoons I had drawn before and were determined to settle the score. I’ve asked a number of Big Vs with some connections about this, and they’ve all answered me this way. Some people from the Ministry of State Security have even threatened my friends to stop asking about this.) From that point on, no self-censorship could walk me back. Exposing their truth became my long-term goal.

The Fifty Centers ridiculed me for opposing communism to the point where I created my own miserable fate. In a sense, those who eat the Party’s food shouldn’t smash the Party’s pot. But I didn’t eat your food, and it’s my pot that you smashed. What’s the reason for this?

This reminds me of Routangseng’s “Send-Food Party” campaigns [to donate to writer Ran Yunfei and lawyer Tang Jietian], which I really supported. I donated several times to the Send-Food Party, because I admire those brave people who sit in prison. I ask myself if I can also confront power. Maybe the Party wants to admonish people one by one as examples. There can be no good end to doing right by the Party. If they don’t throw you in jail, they’ll make it impossible for you to live.

I am starting to feel like it is impossible for me to live. My means of income has been cut off and I’ve used up all my savings. In June I’ll finally start a series that will earn me 96,000 JPY ($800) a month. All I have now is a column I started in May that pays 25,000 JPY ($209) a month. The rent for my university dormitory alone is 44,000 JPY ($367). I’m on a cultural exchange visa right now, so I can’t work. My family can work, but their Japanese isn’t that good, and they haven’t had the opportunity to work yet.

An Internet friend learned about my situation and encouraged me to set up a money collection. I’ve always felt embarrassed to do this, but now I have to give way to my impoverished state. I hope everyone sees me continuing to work and helps me from afar in my urgent situation. I also have a plan to make a series of graphic novels about modern and contemporary Chinese history, starting with an uncovering of June 4th. I hope everyone can continue to support me.

I’ll say no more. Thank you!

In the same tweet, Rebel Pepper shares two samples of the kind of work he will tackle in his proposed graphic novel. The first page shows scenes from the crackdown on protesters in Beijing on June 3-4, 1989, while the second introduces several of the student leaders, Nobel Prize winner Liu Xiaobo, and Ding Zilin, whose son was killed during the crackdown and who has since organized the Tiananmen Mothers group: