Cartoon on HK Counter-Protests by “Traitor” 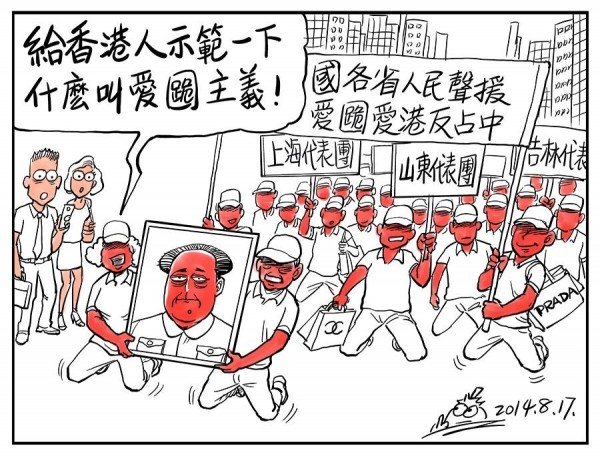 Chinese political cartoonist Wang Liming, aka Rebel Pepper (变态辣椒), has found himself the subject of a smear campaign following the release of his latest piece. In it, he comments on Sunday’s pro-Beijing protests in Hong Kong, where mainlanders were bussed in, clad in matching T-shirts, and organized into groups by hometown, school, or in some cases, employer: Red-faced representatives from Chinese provinces walk on their knees, holding shopping bags from their latest Hong Kong spree, while the woman helping to hold Mao’s portrait at the front yells, “Let’s show Hong Kongers what it means to kneel for your country!” (給香港人示範一下什麼叫愛“跪國”主義！) Wang uses traditional characters, the writing system still used in Hong Kong and Taiwan, instead of the simplified characters of mainland China. He has also invented a new character by combining “kneel” (跪 guì) and “country” (國 guó). In the bottom righthand corner, the Rebel Pepper himself looks on in astonishment.

The day after he posted this cartoon, a post by “babyface” appeared on the People’s Daily bulletin board system (BBS) calling Wang a “traitor” for “publicizing his idolization of Japan.” The post, titled “Shedding Light on ‘Rebel Pepper’ the Japan-Worshipping Traitor” (看清“变态辣椒”亲日媚日的汉奸相), attacks the cartoonist’s musings on his recent visit Japan. Wang had an exchange on Tencent Weibo with 男男, who asked Wang if the Japanese would massacre the Chinese as they did in WWII should China and Japan go to war again. Rebel Pepper replied:

变态辣椒: If you understand that modern Japan is the planet’s sole country with a pacifist constitution, and if you look at the contents of that constitution, then you wouldn’t ask these types of questions. I’d be more concerned about other countries convulsing. By comparison, Japan is pretty normal.

This exchange, since deleted from Tencent [Chinese], transpired on July 10, so the BBS post seems timed to attack Wang for his Hong Kong cartoon. “‘Big V’ Rebel Pepper continues to profess his love and admiration for Japan on Weibo,” writes babyface. “With a traitorous attitude like this—showing contempt for our nationality, beautifying militarism—he will suffer the wrath of public criticism.”

The dirt party‘s process for persecution is to first use spin and slander in the media, then detain people. That’s what they’re doing now. Please surround and watch the official Evening Post’s malicious article “Shedding Light on ‘Rebel Pepper,’ the Japan-Worshipping Traitor.”

Wang was detained for several days last October after posting a cartoon lampooning the official response to flooding due to Typhoon Fitow. His tweets are insurance in case he is detained again.

Even the Global Times posted it. This is going to go viral.

Wang’s friends are looking out for him, even if they aren’t on Twitter. Fellow cartoonist Meng Chenshang left a reply to the Evening Post on Weibo:

梦晨伤: A grand and magnificent country cannot contain a cartoonist.