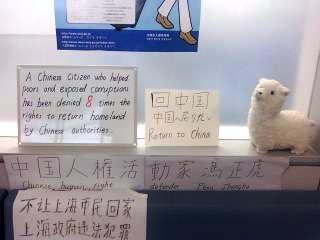 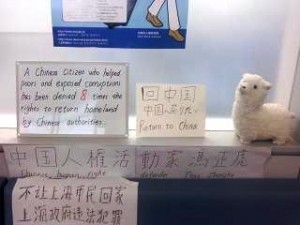 At 1:14 a.m., my online friend Mr. Shushan sent me a message recommending that I change the English sign that I posted yesterday to read, “A Chinese citizen who helped poors and exposed corruptions has been denied 8 times the rights to return homeland by Chinese authorities.” Lion, KeRen, and other online friends were also very friendly, sending me messages the first thing in the morning. My personal concerns have become the concerns of the larger community. With everyone coming up with a plan of action together, things are getting better and better. I really want to thank everyone for coming together to work toward this common purpose. I readily accepted Shushan’s amended translation, in the succinct language that Americans and the British are accustomed to.

Once I started using my erasable whiteboards it became much easier to update the content of my messages. My bulletin board still has blank space, so I told my online friends that if they happened to be passing through to bring me two more erasable whiteboards (size A3, or 11.7 x 16.5 inches) and some dry erase markers. These little notice boards are really effective at getting my message across. Every day, tens of thousands of tourists and political figures pass right by, and the major newspapers and periodicals, television media, and online media outlets of various countries are all covering my story.

Checking my messages, I discovered that a Japanese friend told me that the immigration hall for the Narita Airport has a few wifi networks, one of which is called something like “Narita Airport.” Maybe when he said “immigration hall” he meant the part where you have already passed through immigration. It’s possible that there is a wireless network there. It might be the same network that is in the emigration hall. I have used that network in the past. It was really convenient. For just 500 yen paid with a credit card you could use it for 24 hours. But now, I haven’t entered the country. I’m still at immigration. Being an administrative area, there is only a private network, and no coverage from the airport’s wifi.

If I had my own wireless network card from my telecom company I could get online, similar to getting online from a cell phone. My cellphone can’t access the Internet. All it can do is check email. During the 21 days which have elapsed, even though I haven’t been able to get online to read the many reports on my situation, I was still able to receive a lot of information through my phone. More importantly, I was able to get a sense of the tide of public opinion. The people were all supporting my return home–this was the common demand of the Chinese people.

At 10:45, I was in the middle of writing an essay on my computer when Mr. Motoyoshi from the Narita International Airport Corporation marketing department came to tell me that a reporter from Reuters was coming to interview me. I said, “I know that I have interviews scheduled for this afternoon, but I don’t have any this morning, right?” He said, “Yes, but he’s already here.” I turned off my computer and I went with him to the designated interview area.

I went up to the fourth floor, where I saw a Reuters TV reporter waiting for me. He started filming and asked that I answer his questions in both Japanese and Chinese. The interview took 40 minutes. The reporter told me that Reuters TV was really influential. As someone safeguarding the rights of the Chinese people, my story had travelled all around the world, and I was gradually becoming a global figure. At the same time, I hoped that after being repatriated, I would be able to return to a life of quiet obscurity, doing my best to help those in need. To me, happiness is leading an average, everyday life.

At 2:00 p.m. I went back to the interview area to meet with journalists from the Japanese wire service Jiji Press. Two reporters came, one of whom could speak Chinese. They asked a long string of questions, which I answered one by one. When the interview finished, we chatted off the record. The journalist who spoke Chinese conveyed a greeting on behalf of a lawyer in Shanghai, and also told me that he was the husband of a Waseda University professor I knew. He said that everyone was in support of my campaign to return home. I asked him to pass on my thanks.

In the evening, three Chinese tourists who were transiting through Japan on their way back from the U.S. saw me and came over to ask about my situation. When they asked for information in Chinese, I realized that most of the ones I had left were in Japanese. I only had one pamphlet in Chinese to give them. They were really concerned, and asked me what I did for food and a place to sleep. One of them, a manager type, took out an American dollar bill and quickly tried to stuff it into my pocket. “There’s no need,” I said. Actually, I have money now, but nowhere to spend it. Of course, he didn’t know that. He said, “It’s just one dollar, go ahead and take it.” I didn’t refuse him this time, and thanked him for his kind gesture. It wasn’t until later that I saw it wasn’t actually a dollar bill. It was a hundred dollar bill. [Chinese]