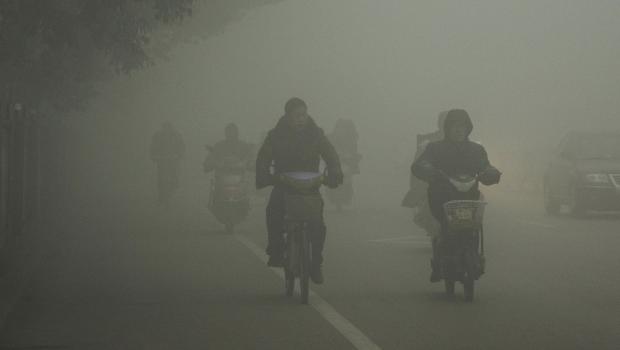 While China’s environmental crisis has increasingly been a focus of popular discontent in recent years, notably after the release of Chai Jing’s groundbreaking documentary “Under the Dome,” government anti-pollution policies have helped clean up the air in some regions. Not so in Baoding, Hebei, which was recently named China’s most polluted city. The Guardian’s Jennifer Duggan visited Baoding to talk with residents:

Expecting coal stacks and factories pumping out toxic fumes, I instead see farmland whizzing past the window as I approach Baoding on the high-speed train from Beijing. Even when driving around the city, it’s not immediately obvious what causes the pollution. The outskirts are home to one coal power plant that doesn’t appear to be in use, with no sign of workers and not a wisp of smoke from the big chimneys. Like an increasing number of plants in the province, it may well have been closed down as part of increased governmental anti-pollution measures.

Yet, on a bad day, Baoding’s pollution levels can rise beyond 300 on the air quality index, which is classed as hazardous for human health. On these days, the smog clings to the city like a thick grey shroud, and its residents are ghost-like shadows moving through the haze. Visibility for driving is reduced and headlights and traffic lights glow eerily, barely visible. Air is not something you can normally taste but, on high-pollution days, there is a metallic tang that catches in the back of your throat.

Despite this, many of Baoding’s residents appear hesitant to discuss the city’s new status as China’s most polluted city, and when they do, are often defensive of it. “It’s OK in Baoding,” Mr Zhu tells me, pointing to today’s unusually clear skies. He is manning a food stand outside a small restaurant; over a hot stove, he prepares thick savoury pancakes filled with vegetables. Zhu says that his version of this popular snack food is the best in the city – and although he spends hours outside every day, he is not worried about the pollution, asserting his faith that the central government is doing something to improve the situation. [Source]

Photographer Souvid Datta has also traveled around China to document the impact of pollution on people’s lives. His photos are available via the Guardian as well.

In another Guardian article, environmental activist Ma Jun says he believes China has reached a critical moment in terms of its ability to reverse environmental damage, yet local officials and business owners are not always able or willing to implement central policies:

After decades of growth at all costs, Ma says China is now at a tipping point. “The development and growth model of the last 35 years has been increasingly dependent on energy and pollution-intensive industries, but how can we go on growing all these sectors every year with double digits?

“I think its time to change and balance the environment and growth. If we don’t do that we’re going to suffer a hard landing one day very soon,” says Ma.

China’s leadership has promised a “war on pollution” to regain public trust, but it is the decisions of local government officials, says Ma, that dictate what action, if any, is taken against major polluters.

“It’s the local environmental officials that are in charge of enforcement, but they are subordinate to local government. Their heads are appointed by local government. Those who want to stick to the laws could be replaced. This is the very harsh reality. It won’t be easy to change that.” [Source]

Read more about environmental activism and air pollution in China, via CDT.