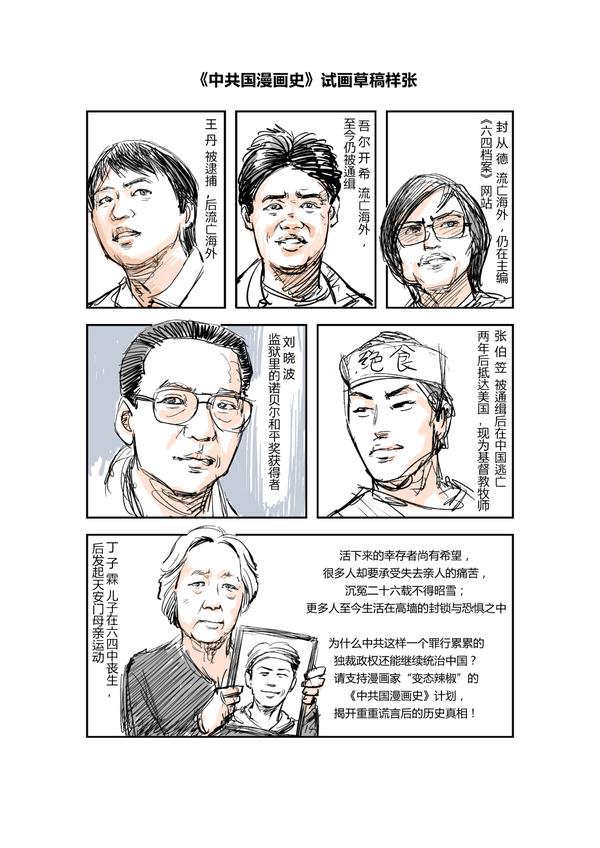 Last month, cartoonist Wang Liming, also known by his pen name Rebel Pepper, issued a public appeal for financial support as he has had a difficult time supporting himself living in exile in Japan. The Committee to Protect Journalists’ Sumit Galhotra profiles Wang:

But Wang’s decision to remain in Japan has led to another set of challenges. The cartoonist, who had hundreds of thousands of followers on social media before his accounts were deleted on sites including Sina Weibo and Tencent, is now struggling to make a living. Last year, Taobao, an online shopping portal owned by Alibaba–China’s biggest e-commerce company–closed Rebel Pepper’s Little Shop through which the cartoonist supported himself, reports said. Alibaba has not publicly commented on why the online store was closed.

Selling the occasional cartoon to Japanese publications and his position as a visiting scholar at a Japanese university, which offers no stipend, are not enough to keep him afloat, he told the Christian Science Monitor this week. Wang added that so far, he and his wife have not been able to apply for political asylum in Japan. The pair have “cultural exchange” visas that are set to expire at the year’s end, the report said. [Source]

The Christian Science Monitor’s Peter Ford interviewed Wang about the circumstances that led to his exile in Japan:

He said in his public appeal that he was “so ashamed” to ask his supporters for money, but that “there are really no better solutions.”

At the moment, Wang says, he “cannot see the future.” But he has started drawing a narrative comic strip about China’s recent history, starting with the Tiananmen massacre in 1989. “If the government says I am an enemy of the state I will say whatever I want to say,” he declares. “I have nothing to lose any more.” [Source]

Though his name has now been virtually wiped off the face of China-controlled Internet sites and Twitter, he’s not holding back on his opinions, thanks to his satirical cartoon wit. And because his works are no longer influential within China, concern for his family’s safety is no longer a large issue.

“I had no intention of becoming an enemy of the state. I started out drawing cartoons for my own interest without realizing they would influence so many people,” he says. “But the Chinese communist party has no sense of humor. They pretend they’re gods and can do no wrong. They’re like extremist Muslims who try to present a noble image.”

Wang says the conditions of freedom of speech in China have worsened since he left. “The arrests are different from before,” he says. “Before, they would first send people a letter of warning. Now there are no letters. People just disappear.”

[..] When complimented for his bravery, however, Wang is self-effacing. “If I were really brave I’d go back to China. I’d continue to fight and willingly suffer the consequences,” he says. He cites the bravery of his friend, activist artist Ai Weiwei, who remains under house arrest in Beijing with police surveillance cameras mounted around his home and studio. “Actually, I was very frightened,” he admits. “I often had nightmares after uploading my political cartoons. I was always afraid of being arrested or attacked.” [Source]

See more by and about Wang Liming, via CDT. See also a recent CPJ report “Drawing the line: Cartoonists under threat” about the dangers faced by cartoonists worldwide.