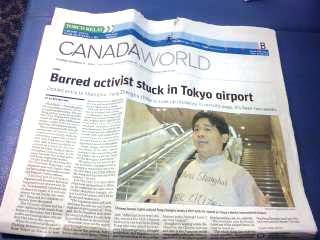 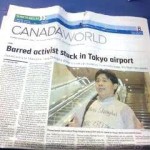 Today is my 24th day camped outside the gate to Japan. This is the shame of the Chinese people.

At 2:15 a.m., I was woken up by my cell phone vibrating. I drowsily flipped open the phone and saw that U.S. Army Chaplain Xiong Yan was calling. Mr. Xiong was a student leader during the 1989 Tiananmen Movement. He was later exiled to the United States, joined the church, and studied theology in Boston. In 1994 he joined the U.S. Army. He pursued a master’s degree in theology in 1998, and he later became a chaplain for the U.S. military in Iraq. He has since returned to the U.S.

It’s already November 27 in Japan, but it’s still the 26th in the U.S. Chaplain Xiong took the time to pray for me and offer his blessings to me, a total stranger, an average Chinese citizen. He told me, “Today is Thanksgiving. In the West, this is a day to be together with your family. But you can’t be together with your family. You are alone in a Japanese airport. I feel horrible about your situation. There are many people all around the world who are concerned about you.” He continued to ask me questions about my situation, which I answered one by one. He said, “Many people are paying close attention to your plight. I will relay this information to them via email. You must have faith that God is with you.” I was grateful for Chaplain Xiong’s blessing. Indeed, God will protect me–a man who is struggling for human rights in China.

As a Chinese citizen unable to return to my country, I must endure spiritual humiliation and physical torture every day. This is a tragedy for the Chinese people and for all of humanity. Where has the Chinese government, which is responsible for the protection of its citizens, disappeared to? Why are Western governments, which profess reverence for freedom, democracy, and human rights, so slow to say a single word? A Chinese citizen has been camped outside the gate to Japan for 24 days. Is it possible to still consider this nothing but a Chinese issue? The United Nations Constitution, international human rights treaties, the laws of this nation, universal respect for human rights, and governments’ sense of justice, conscience, and responsibility–where have they all gone? Does government really just exist for money and power?

Perhaps a Chinese citizen’s right to exist is but a small matter unworthy of mention to a government. After all, the governments of China and Japan are busily planning the East Asian Community. Which countries we are fighting with–that’s what’s important. Wait until those “harmonious” and “friendly” national leaders deal with their big affairs–then perhaps they’ll concern themselves with my little problem.

At 10:00 a.m., the chief editor of Beijing Spring, Mr. Hu Ping, phoned me from the U.S. I first knew of him in the early 1980s, when a Wuhan magazine called New Youth published installments of his long-form essay “On Freedom of Speech.” I know that this magazine caught the attention of Party’s top leaders at the time. The chief editor made a point to send me copies of several issues. I still have these relics. I had never been in contact with Mr. Hu Ping before. Last month in the U. S. was the first time we met. Though he’s been living in the U.S. for a long time, his influence among intellectuals in China remains strong. Most reputable intellectuals know of him, as he is an outstanding theorist on the issues of freedom and democracy.

Hu Ping extended me greetings on behalf of Yu Luojin. He told me that I should check my email for a message from her. I get a lot of texts and emails, but I found this forwarded message quickly. It is such a warm letter. I thank Yu for her concern and her invitation. I wanted to publish her letter on Twitter, to share her faith and her positive attitude with all of my friends, and to invite everyone to take a look at her blog. Her letter included her address, which I will delete. This is her personal information, and without her consent, it should not be published.

I have learned quite a lesson from your diary. At first, I didn’t really agree with your insistence to return home, because there are so many of us outside the country who have homes in China, yet we do not wish to return. But you do. One wrong move, and you could end up in jail once you get back. Just how would it feel to be locked up for a few years? But after reading your diary (in an email report from the China Post), I have changed my mind. Because through your actions you are telling the world: I just want to go home. I am human. I have the right to return home. Not only did I learn a lesson, but I also came to admire you.

There is a feature film that came out in the U.S. a few years ago that was adapted from a true story. In the film, an Iranian is stranded at an American airport for over a year [hover for note]. But your ordeal has more political meaning than his; it’s even more vivid, more moving for people all over the world. I believe someday a producer will come asking to make your ordeal into a film–and you might as well play yourself.

I am writing this letter today to tell you that if there comes a day when you are fed up with the airport, when you no longer want to go on, don’t forget to come settle down in Germany. At the very least, I will be here to welcome you just as your sister would, to help you, just like those caring Taiwanese helped me in the beginning. I couldn’t speak German or English at the time, and without their help, I wouldn’t have been able to take one step. Germany is a lovable and beautiful country. If you and your family were to spend the latter half of your lives in Western Europe, not only would there be no need to fear, but all the ups and downs you’ll experience here would be great material for your writing. At the very least, you’ll have the freedom to write whatever you want. I’ve included my address, telephone number, and email address. If you get bored, you can have a look at my blog. My autobiographical novel, “A Big Fairy Tale,” is posted in its entirety in September. There are also some great articles written by others and links to material that is written in ways that are much more real and daring and beautiful than those in China. China’s good writing can only be published outside of the country.

This is my letter of support for you. Please take care. I wish you happiness.

At 11:45, a reporter surnamed Wang called from Nanjing. “I read about you on a Chinese website and immediately searched for more information about your situation. It’s quite shocking–who would have imagined something like this could happen? As a journalist, I would really like to report on this, but, as you can understand, this isn’t possible in domestic media. But I will continue to pay attention to your plight. When I watched the military parade this year for the 60th anniversary of the founding of our country, I was filled with pride for the strength of our nation. But as soon as I read about how the authorities have turned you back from your own country, leaving you camped outside of the gate to Japan, all that pride was immediately swept away. I never thought that China was just a paper tiger. How could the Chinese government be so incompetent? This is truly an embarrassment for the Chinese people.”

At 12:30, several Canadian Chinese called to express their sympathies and support for my patriotic actions, and asked if they could help in any way.

At 1:30 p.m., a rights activist from Sichuan, Mr. Chen, called to ask how I was doing. He told me, “I activated the international calling function on my cell phone just so I could talk to you. The people of Sichuan send their regards. We all support you. We are protesting the Shanghai government’s illegal denial of your return.” I thanked them for their support, and asked him to send my regards to my friends in Sichuan.

At 4:00 I was feeling a little tired. I sat in my chair and closed my eyes to rest a bit. Suddenly, I heard an old man speaking loudly in Chinese to a female attendant of All Nippon Airways at the information information desk next to me. This young woman did not understand Chinese, which made the old man even more distressed. I opened my eyes and went over to help them. It turns out this old Chinese couple had just flown in from Washington D.C., and they needed to transfer flights. They still had three hours, but they didn’t know how to transfer. I explained their situation with the attendant. They didn’t need to go through immigration to transfer. The attendant looked up their flight information and found their gate number, and led them over to the gate. The old man thanked me, and he told me that he knew of me, that he had seen me in the newspaper in New York. I wished them a safe journey.

At 6:30 an Air Canada stewardess walked my way with a smile on her face, rolling her luggage and carrying a paper bag. She came to my encampment and handed the paper bag to me, pulling a newspaper out of it. “This newspaper reported on you.” I took a look. I was the headline story in the English-language paper Canada World, with a big picture of me above the fold. Also in the paper bag were a pack of Pampers brand wet wipes, a bag of assorted cookies, and a few suckers. What made me the happiest was seeing the newspaper. I had been interviewed by many newspapers and TV shows, but in this isolated environment I haven’t seen a single newspaper or watched any TV. This was the first paper I had seen reporting about me. “Thank you very much,” I said to her in English. “Good luck,” she replied.

She left and came back with two small bottles of shampoo. Perhaps she knew that I haven’t washed my hair in a very long time. Unfortunately, I don’t have any way to use it here. I thanked her again. After she left I took out a sucker, the taste bringing me back to my childhood. I’ve become a little boy, looked after by the people of the world.