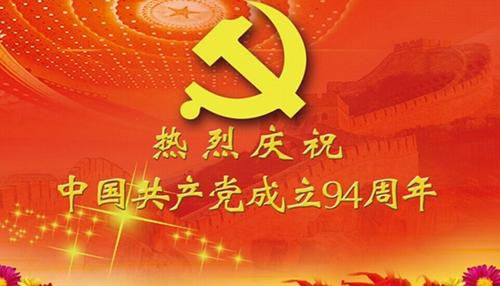 Today marks the 94th anniversary of the founding of the Chinese Communist Party. Previous Founding Days have been celebrated with filmic paeans to that first meeting in Shanghai. This year, state media are emphasizing Xi Jinping’s ongoing anti-corruption drive. Xinhua reports that diplomats and scholars from the Middle East and Russia “spoke highly of the party’s governing capacity and efforts in the fight against corruption.” The Global Times makes its commemoration with an opinion piece on history’s judgement of the CCP:

China certainly isn’t the country with the world’s worst corruption, but it is the country which has fought corruption most persistently and fiercely in recent years. Another fact is also without doubt, that the Party sounded the alarm that “corruption could take down the Party and the country” well before the crisis reached a critical point.

[…] New China has made some mistakes. The Party has not denied its blame, facing it head-on instead. All mistakes have an irrevocable aspect, but history best clarifies the total process of every era’s mistakes. History has a far broader view than any individual. History has chosen the Party, and continues to support the Party leadership in realizing dream of the great rejuvenation of the Chinese people. History’s attitude towards this is ever more steadfast.

A cadre who dives into the whirlpool of controversy cannot represent the Party. China has gone from a country that couldn’t even manufacture cars in 1949 to the world’s second-largest economy. The material and spiritual lives of the Chinese people have been utterly transformed. These have become indelible achievements of the Party. Yet this is not the end. The Chinese people have still higher expectations for the Party. The Party has only just begun to realize lasting world peace and other missions for the whole of humanity. [Chinese]

On Weibo, some readers have responded to the Global Times with suspiciously effusive praise. “The truth of the universe unites every corner of the country, the red party is passed on to all generations!” exclaims @gnihty. Others compare the longevity of the Party to the Qing Dynasty:

Lanniuniudelaoba (@懒牛牛的老爸): For 267 years, the Manchu-Qing were the world’s Number One. Are you sure you’re stronger than them? Wait for later generations to judge! The ruling dynasty writes the history of its predecessor.

Chaliangjun (@查良钧): Without the Manchu, there would be no Qing Dynasty. No one would dispute this, but it’s no reason for the long life of the Great Qing. [Chinese]

Still others take aim at the Global Times’ glossing over of the “mistakes” made by the Party, especially in the early days of the People’s Republic:

Jiangshuishangren (@江水上人): Just some mistakes, eh? Open up the records from after the founding of the country, then. In the eight years of the War of Resistance [Against Japan] only 20 million people died. But in three years of peace, three years with good weather for farming, 30 million people starved to death. That’s rather efficient. The militia blocked roads and wouldn’t let the people beg for food. When the Party wants to save face, the farmers lose their lives. [Chinese]

Official sources often breeze over the mass starvation caused by Mao Zedong’s Great Leap Forward. Last fall, a website affiliated with the Chinese Academy of Social Sciences chalked up the Great Famine to “exploratory error” on the path to building a socialist nation.

The Global Times editorial falls flat for many readers, who are unimpressed by the mitigation of official corruption and question the “choice” history has made for them. As @youqu35 puts it, “If you’re so self-confident, why don’t you hold an election?”